While I’m not sure it quite qualifies as an FAQ, several of you have asked about our ‘dashboard plant’. 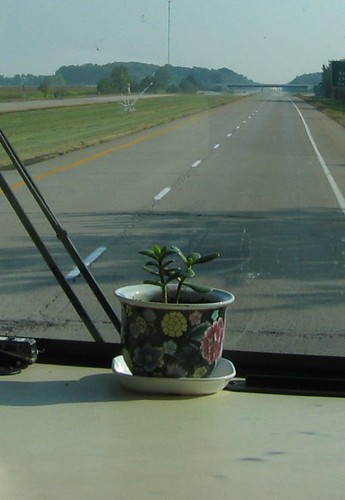 This little jade plant has come along with us for our entire journey, and is, in fact, a cutting from a plant I bought the first year we were married (1971). It had gotten quite huge in the 30+ years of our marriage before we left home (like with a 4″ diameter stem), so we left the big guy with friends, and just brought these little cuttings.
It seemed to like its place of honor on the dash board 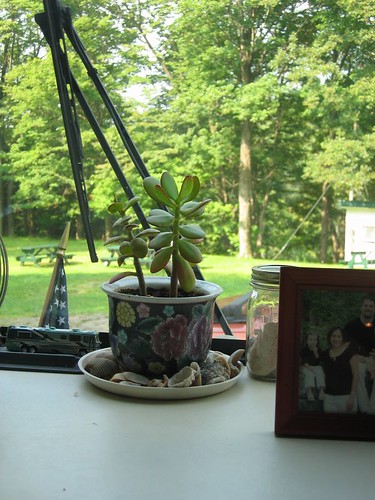 and grew quite nicely over the years. 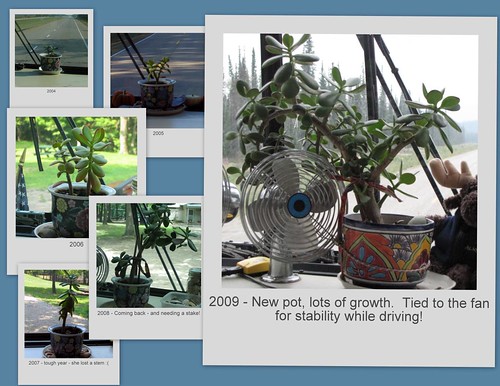 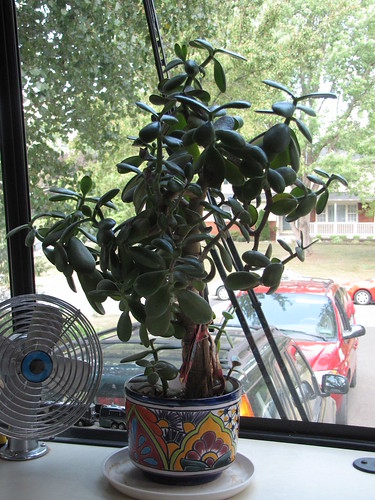 it was taking over the windshield!
Somewhere along the way I did another trim job as you can see. Here it is enjoying life on my daughter’s porch while we worked on her kitchen. 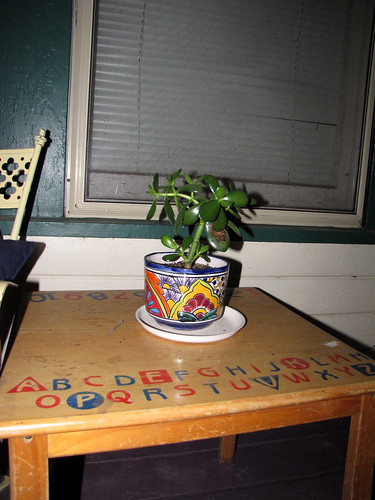 We snagged a little aloe plant in the Keys and just stuck it in the pot in January of 2011.(Don’t be alarmed, the photo is from NC several months later. It’s the first one I could find with the aloe plant visible. 🙂 ) 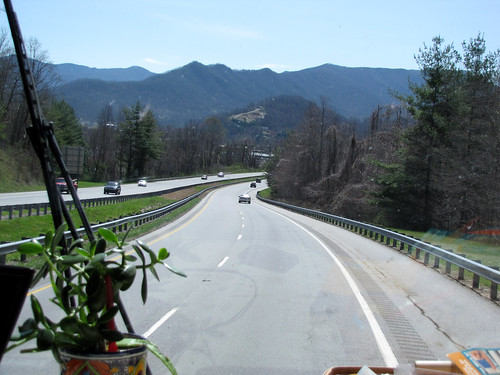 and soon the two plants were vying for space. 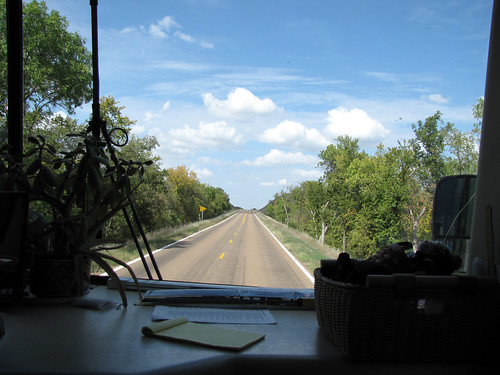 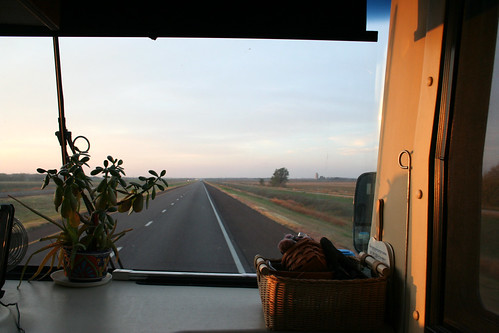 so during our 2012 visit to Waco we separated the girls. 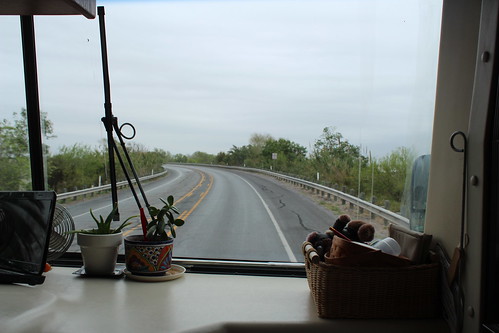 We left a fair bit of the plants behind in Waco, but they were very happy to have their own space and they began to thrive again.  It’s all about boundaries, right? 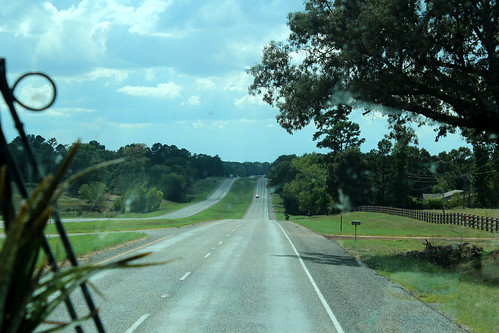 They were both too happy in their new pots that by the time we drove to the Rio Grande Valley in the fall of 2013, the jade took its last trip on the dash. 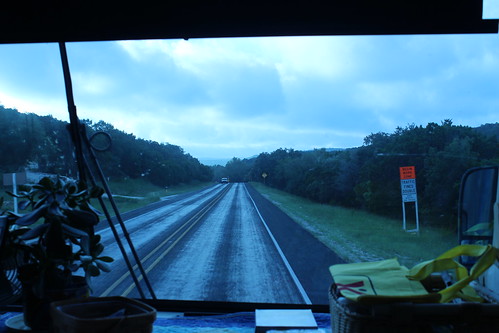 All that time in the warm Texas sun made them too big to ride up front any longer.
Sniff. 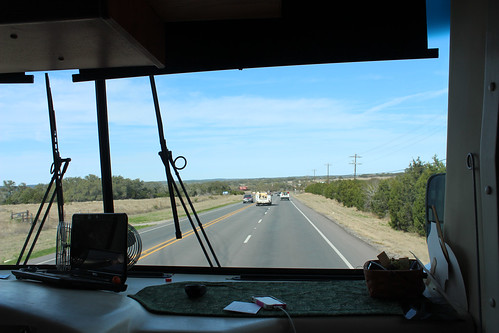 But don’t despair. The plants are still with us, they just have a new spot that doesn’t obscure the driver’s view of the road. 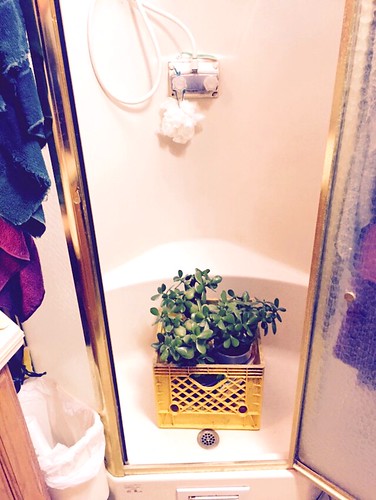 And once we get settled in at our new parking place, they’re right back where they belong – 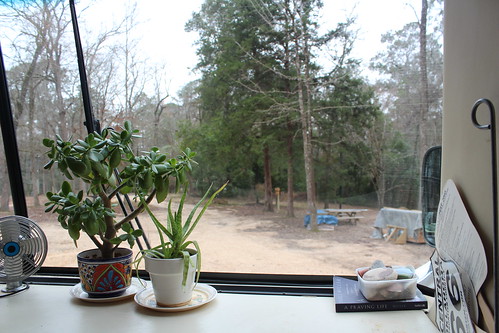 Keeping watch over the road ahead!

P.S. If I ever get my act together and do another re-potting (and find good homes for all of the left over plant!), you may once again catch glimpses of the dashboard plant, back where she belongs – photo-bombing my myriad windshield shots! 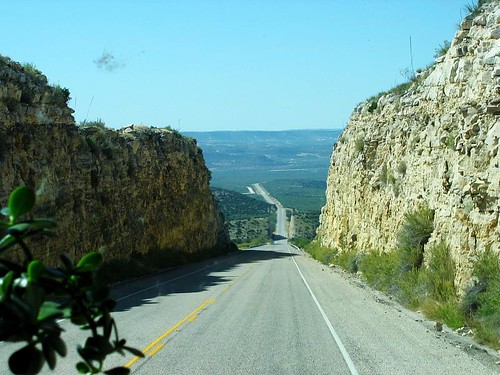 As for the mystery of where the dashboard plant was in all of the Windshield Shots in yesterday’s post – it’s just a matter of zooming and cropping. She was there for almost all of them!