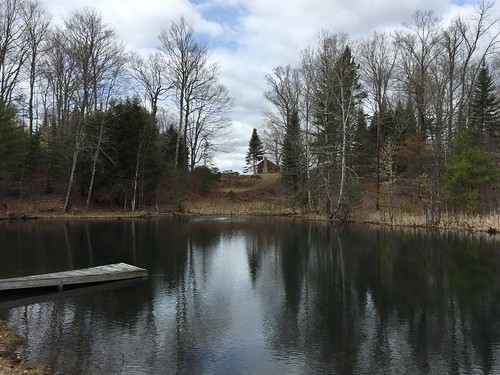 April 27 – May 2, 2015
Gary & I were excited to once again be the “first-up” at the cabin. She wintered well – just the normal collection of dead flies and mouse poop to vacuum up. The road was in great shape and all in all she welcomed us with open arms. The wood box was full and there was enough water to see us through until we got the cabin water up and running – so thanks to the ‘hunting guys’ who were up here last fall! 🙂 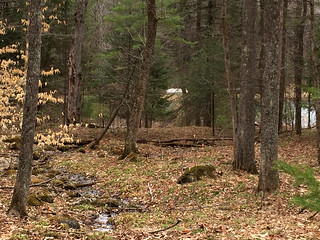 Our major goals (besides naps and books) were to get the water started and get some areas cleared (since it’s so much easier to do before things leaf out). The water project was delayed due to a broken part (and the need to run to civilization for supplies), so Gary started first thing on his “beating back the wilderness” plan. Much progress was made – we’ll see how long it lasts! We worked together on Wednesday on the water start-up – Gary doing all the work, me taking notes and pictures to write up “easy to follow (?)” directions for the next guy. I can’t say I’d be able to do it myself (due to the need to repair broken pipes, etc), but at least I understand the process. I think. 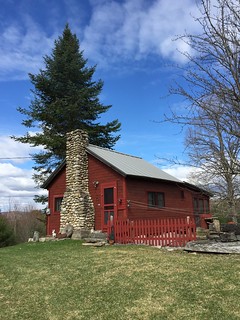 Gary continued on with his chore list and I continued on wandering around with my camera, taking naps, reading, and shop-vac-ing dead flies and ladybugs as needed. Other items accomplished include (but is not limited to) a couple of new outlets, reseeding of bare spots from last Fall’s rock work, ATV rides, books read, family visited, and ice cream eaten. (Our early season research confirmed that the Mini-Mart’s $1.59 two scoop dish is still the best buy around!).
Today (Friday) we’re wrapping up the loose ends. Gary drives me to meet Elna this afternoon for the official start of Girls Week 2015. He’ll be staying over until Saturday before he heads back to Montrose. So, dear Cabin, thank you once again for the special beauty that can only be found in the early spring. You have brought peace to our souls and rest to our bodies.
Blessed beyond measure, we’ll see you soon!
Gary & Steph
Oh – I almost forgot! Along with our standard bird sightings (robins, phoebes, jays and sparrows) we also saw a big tom turkey and, much to my delight, an OWL!!! Gary went out for a midnight (ahem) walk and there perched in one of the pear trees (yes, less than 15 ft. from the back door!) was a large Barred Owl! He watched us gawking at him for a couple of minutes before he silently flew away. My first sighting of an owl in the wild and it was spectacular! “Who cooks for you”

(The above was copied from the actual Cabin Journal we keep at the Cabin. What I can’t do on that paper journal is to say – if you’d like to see additional photos of The Cabin in early Spring, you can check them out HERE!)