The Conrad Christmas 2015 was wonderful this year. Oh, there were a couple of rough patches – a stomach bug seemed to be making its rounds – but over all it was down right grand. We split our time in Ohio between our two kids that live in the Columbus area, but not exactly next door. Like about 40 miles apart. We arrived at Lara’s for Christmas Day, and moved up the road to Toby’s the following Wednesday. Josiah and family arrived from Lancaster, PA, at Lara’s on Thursday (New Year’s Eve) and we all gathered at Toby’s for our big Christmas Celebration on New Year’s Day. Well, most of us gathered – that was the day that I succumbed to the stomach bug, so I was back in the motel feeling pretty darn sorry for myself. I made sure someone had the camera though, so all was not lost –
As the day was beginning…. 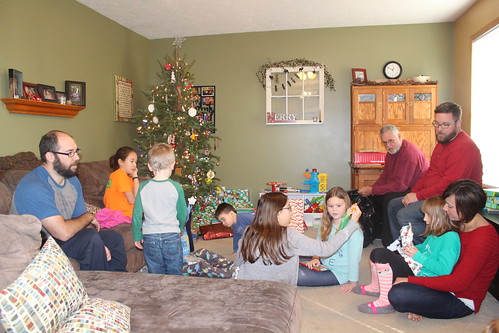 And as it was winding down – 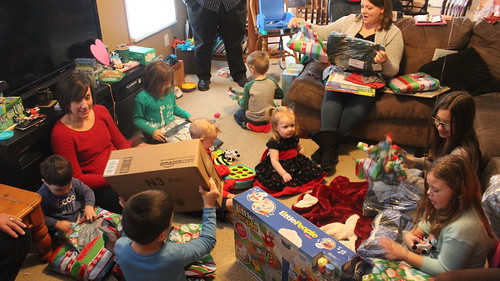 Man, I was sad to miss that! But it sure looked like everyone was having a good time! 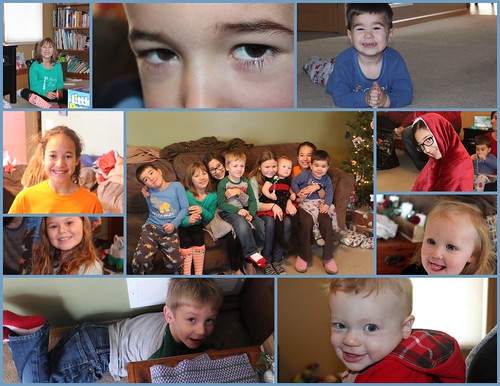 The next day (thankfully I was feeling better and able to join in the festivities) we did our annual Birthday Dinner. (Toby’s is on the 26th and Lara’s is Jan 4.) I confess, I sometimes approach taking 17 people out for dinner (9 of them being under the age of 13 and 5 of those being 5 and under) with a bit of stress. This year was awesome! The kids chose the Haufbrauhaus, which is essentially a Bavarian Beer Garden. There was live music (and dancing, if you wanted), great beer, and some pretty fine German food! 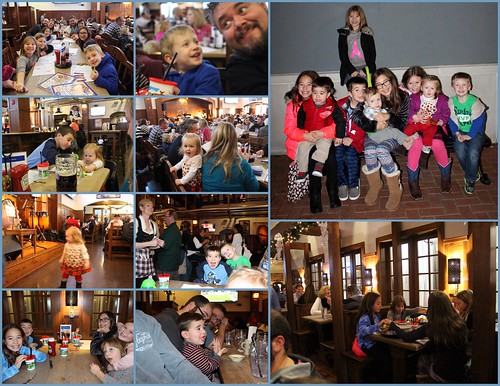 Such a fun birthday celebration!
For our final Big Family Outing we went bowling! Now it’s been a while since I’ve even been in a bowling establishment, and I have to say – my, how times have changed. We went to Star Lanes, which I just saw is advertised as “boutique bowling”! Not only was there an extensive arcade area (helpful since we had an hour wait), but there was also a bar and grill, a fireplace, lots of table space and lounge area. And remember how you used to have to KNOW how to keep score. Nope. Not any more! Like I said – it had been been awhile! 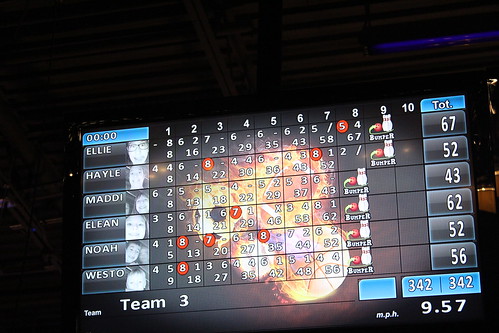 How crazy is that???? The six kiddos and 4 grownups that bowled had lots of fun – and us oldsters or baby-holders had fun watching them! 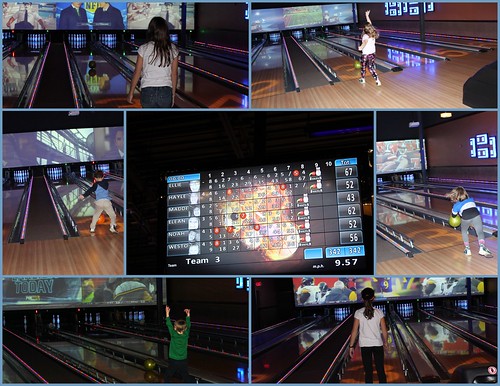 (I know, the collage is just of the kids, but really, the back ends of adults bowling is not that interesting. But those kids sure had the moves!).

We enjoyed every moment of our times with these kids and grands. Whether we were all together or just with each individual family, each moment was a treasure*. We played games and read stories and watched movies and ate too much and then played some more games. I am so very blessed to call these folks Family! 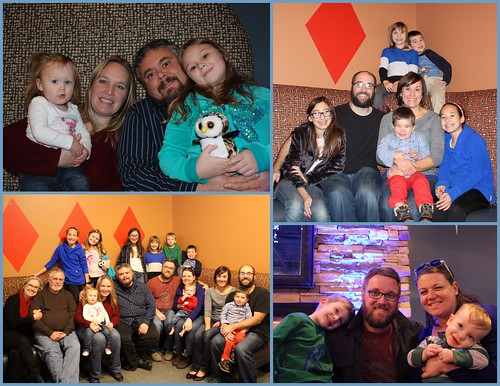 If you’d like to see more of the 2015 Conrad Christmas (including the photos in the collages), you can check them out here.

*Full disclosure – The extra time I spent in the hotel room – that was not so much of a treasure!

One thought on “Christmas Memories”