Sometimes it just creeps up on you. You are just going about with life in general when suddenly it’s time to turn the calendar over! October has been a busy month for us – three locations, becoming Texans, working a SOWER project and spending time with family. So before we start that new month  tomorrow, here’s a bit of a summary-

Aside from all the licensing and address changing and becoming Texans, we also had a sweet time with our Waco kids and grandboys!
Although Weston, the 6 year old, was in school most days, we did get to have him for an overnight and then he rode with us as we got the RV inspected. 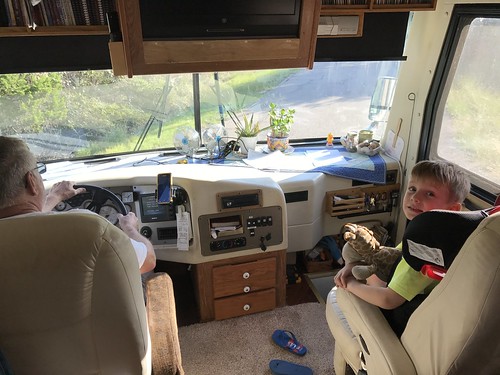 Having him along made the inconvenience of having to move the house in the middle of our stay much less painful. There were also a couple of intense games of Battleship, which I may or may not have lost.
We got to hang out a lot more with Taran, who at 2 and a half is still a homeboy, and is just about as fun as a little guy can be. 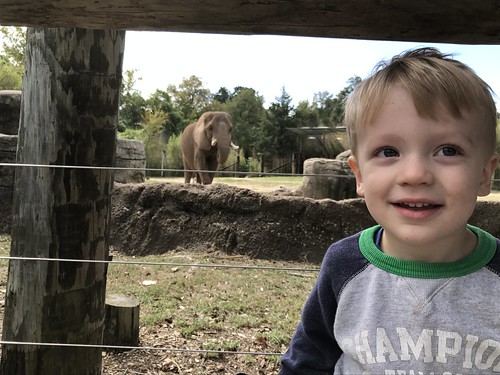 Aside from some very special family time, we also did what any new homeowners are apt to do – we started some projects!!!  First we lined up a bit of a re-do on the driveway. I confess that when Gary first staked out the “new” size, I was a little skeptical. It seemed like a bit of overkill (or over-concrete I guess you could say.) You can’t see the whole driveway in this picture, but it’s just one car wide and the car is backed in all the way to the end.

It was a busy couple of days – 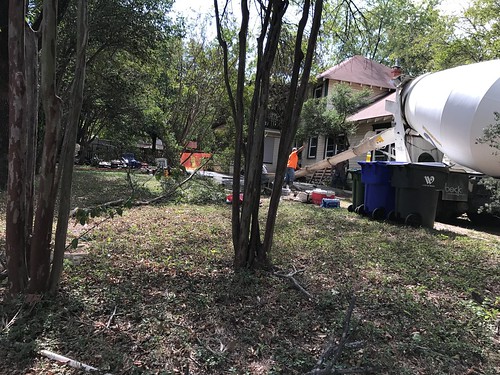 but at least one little boy was having a grand time watching all the activity. 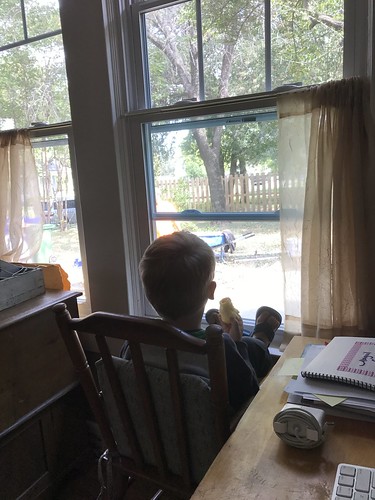 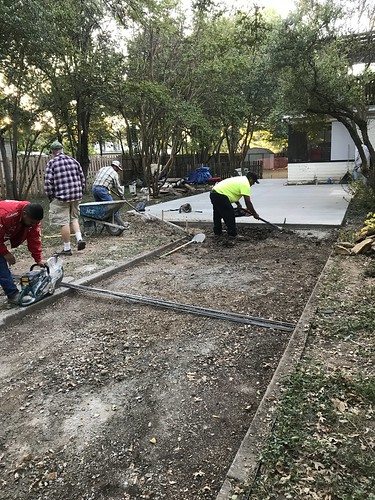 When all was said and done – 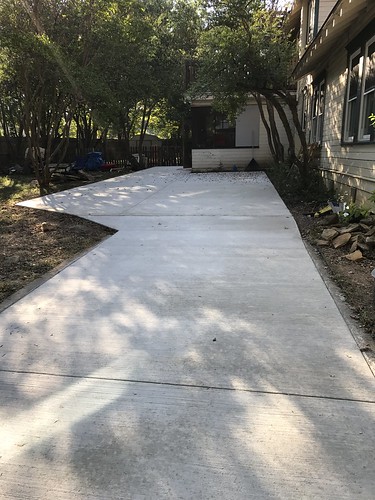 Not only is there room for two cars to park, but a fair bit of bike riding and chalk art could also be happening in the future! (Sadly, unless we totally reconfigure the front of the yard we cannot get the RV on the property. Oh, well.)
We also had a some tree trimming done (more entertainment for the little (and big) boys in the house!)

and Gary started on a new shed. 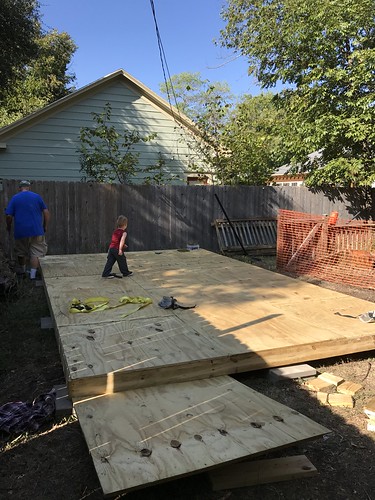 I’m pretty sure that will be a couple of years in the making!
All in all it was a great couple of weeks. 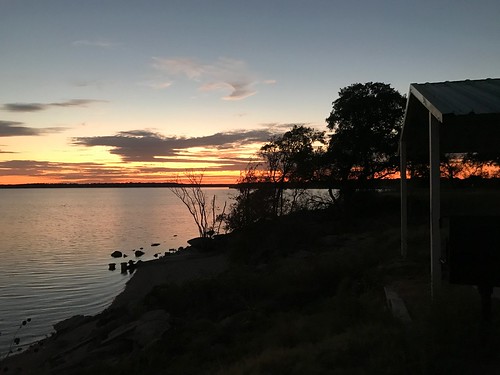 Our time at Forest Glen Camp was a little atypical for our SOWER work. Although our timing was a little different (we came in late and then worked an extra week), it was obvious that God had the timing worked out perfectly. We arrived just in time for Gary to orchestrate the electric in a cabin remodel they were on a deadline to finish. 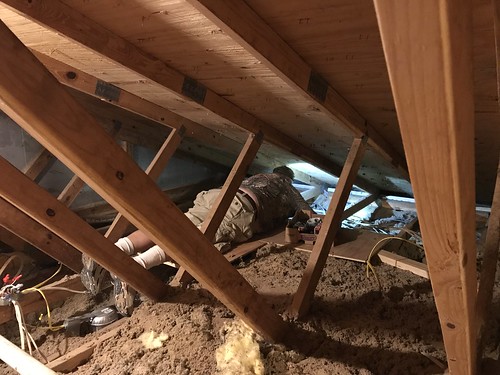 While Gary worked on the wiring and lights and switches, I helped out in the painting department. 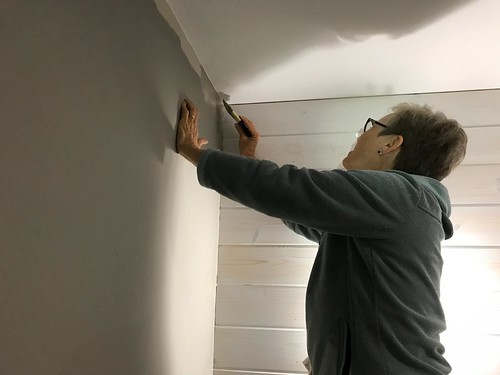 We had bee-U-ti-ful weather, and thoroughly enjoyed our time there! 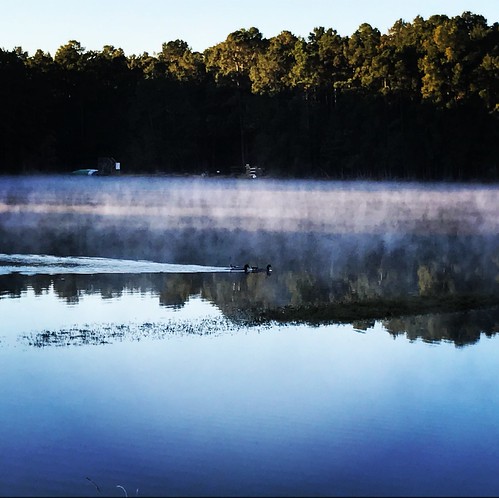 We arrived here Sunday (deciding that the best time to drive through Houston was Sunday morning) after a bit of a tire incident that we discovered as Gary did his pre-trip check Saturday afternoon. Turns out one of the inside back tires had come off the rim and needed to be re-beaded. (I’m just repeating tire terms. All I really know is that it was flat and needed to be fixed and it was Saturday. Ugh.) Thanks to a friend of a friend, we found a local guy who came out Sunday morning, got the tires off and repaired and back on,

and we were on our way a bit after 10 AM. While the traffic was steady the whole way through Houston, it was never awful 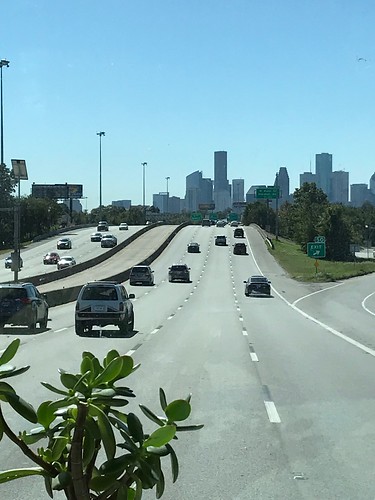 and we were parked in our new neighborhood by early afternoon.

Our work here at Gulf Coast Church will revolve around hurricane relief work. The camp was badly flooded and there is lots to do! We’ve been joined for the next week or so by nine men who have come down from Montana! 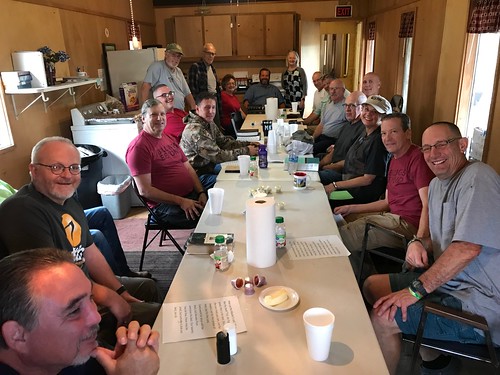 With this many hands I’m sure lots will get accomplished!
There is a little more detail about where we are over on the So Where Are We Now? page, and I’m sure I’ll have more to share once we get a bit more into the project.

So that about wraps it up for October. It was filled with so many good things that it just seemed to whiz by!! It’ll be Christmas before we know it, right?? (55 days as a matter of fact!)
Thanks for stopping by –