When we left Waco last weekend, we said our good-byes thinking we wouldn’t be back in town until late November.  But when Gary tracked down the metal roofing he wanted for the shed, and it could be ready by yesterday, it seemed that another quick (as in under 24 hours quick!) trip to Waco was in order!

Although I had my doubts, my guy was pretty sure we could handle the roofing job ourselves.

Really?
Thankfully, at the last moment, dear SOWER friends who live in Lindale offered to come to Waco for the day to give us a hand! We were so thankful they came, because without Mike, I’m pretty sure we would’ve abandoned the project before the first sheet was screwed down.
We worked out a great system on the first side where Mike would slide the  sheet up, measure to make sure it was straight, and then I would steady it until it got screwed down from the top and bottom by the guys with the power tools. 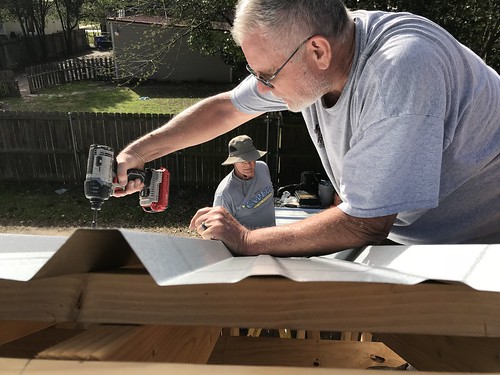 The first side went pretty well but when it came to the second side there wasn’t really room for me, so I was (thankfully) demoted to the ground patrol .  I did miss the view, though! 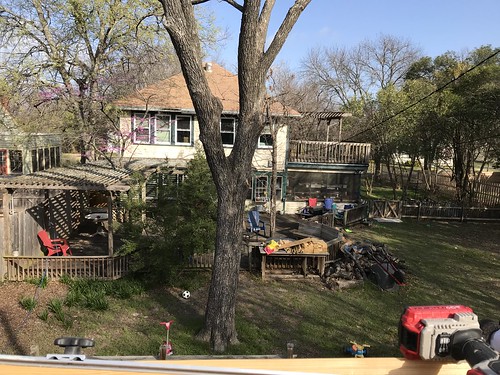 The guys handled it just fine without me (no big surprise there), but I did come in handy when they dropped a tool or needed more supplies.

The trickiest panels were the final pieces on each side since there was no where to stand to screw them down.   Gary and Mike were pretty creative (and somewhat fearless, it seems) and figured that if they tied a ladder to one side of the roof (and then the other side) they could get the job done. 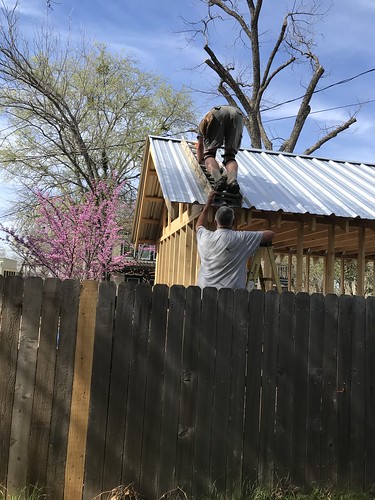 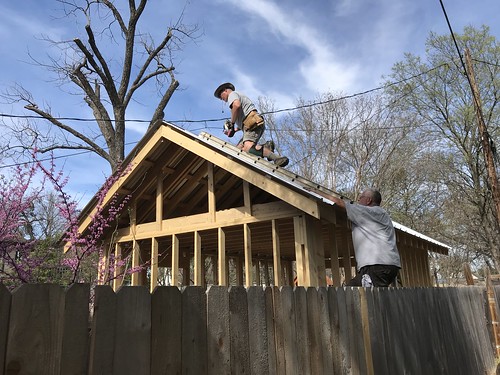 I know – crazy, right??? (That’s Mike up on the ladder with Gary as the ‘spotter’. Gary had already taken his turn on the ladder on the other side, and I honestly could not watch. Let alone document. Since he had survived without an ambulance ride, I figured I could take a couple of shots when it was Mike’s turn.) We were all pretty happy when the ladders were put away for this job! 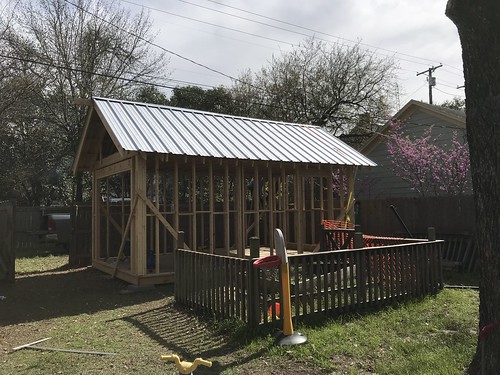 By 4:30 the job was done, the tools and ladders were put away and we were heading back to Lindale. Here’s a super shout out to Mike and Bonnie for coming to town to help us with this. We truly could not have done this without you. In fact, after all was said and done, I heard some words come out of Gary’s mouth that I almost never hear –
“I really should have hired this out!”

We didn’t have much chance to interact with the kids between school and schedules (and shed roofing), but I still have to say the highlight of our zip-in, zip-out trip to Waco was this – 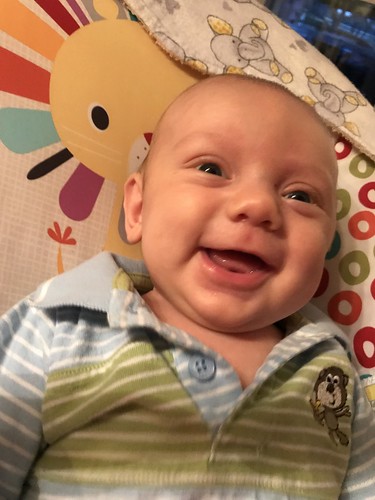 Missing our Waco family (especially this little one who is changing every day!!!) already! Thanks goodness for FaceTime.

One thought on “A little more Waco”