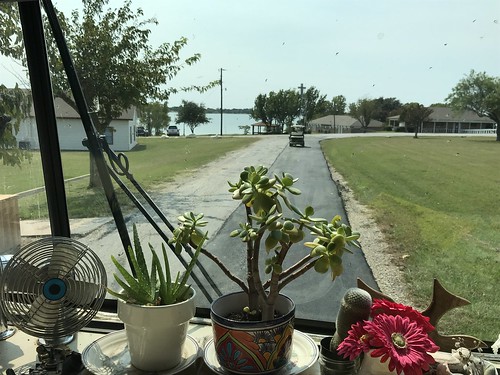 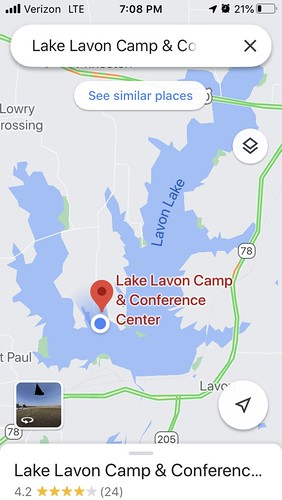 This is a great location, with lots of lake frontage, and it might look like we’re really in the middle of nowhere. However, if I pan out with my Google Maps, you can see 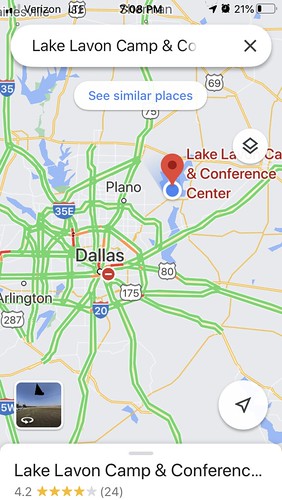 we’re really just outside of the greater Dallas/Ft. Worth area! In fact, we’ve already gotten a Costco fix – it’s only 30 minutes away! Whoohoo!
While this camp is well established (founded in 1951), it’s new to the SOWER family. We’ll be working with another couple and are already looking forward to getting back to work – even though we haven’t a clue what that actual work will be! But after all, that’s the beauty of our ministry – every month is different! 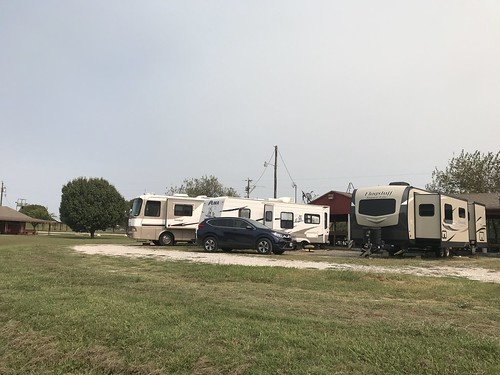 Happy October, everyone! (And Happy Birthday to our Reis, who turned SEVEN today! 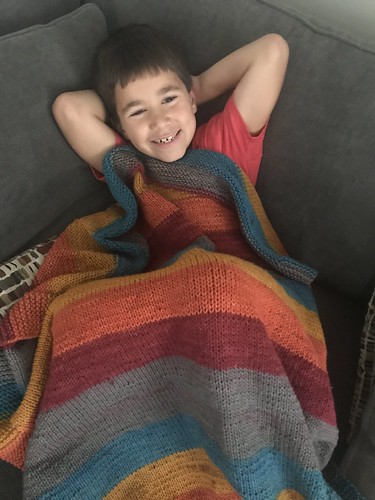 These kiddos are growing up Way.Too.Fast.)

Our time “In Transit” for the last two (plus) weeks has been busy and full. Full of hugs and love and friends and kids and grands. There are more stories to tell (starting with Ohio Days – Part Two), but for now we are just happy to be still.  After day’s delay, this morning we hit the road for Lindale. 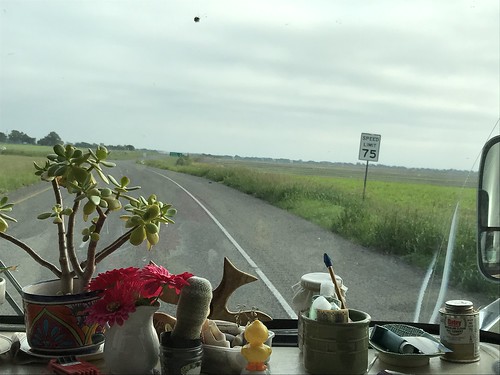 (No, we were not doing the speed limit. Yikes!)
We arrived after a perfectly boring 3 hour drive, and got settled nicely in the quiet (for now) SOWER RV parking spot behind the office. For the next two weeks Gary will be preparing for the SOWER Board meeting at the end of the month along with doing some house projects, and I’ll be working on some sewing projects, some photo organization, some file purging, some nap taking and some late sleeping. Maybe even some book reading! An extra bonus is that we have lots of friends in the neighborhood, so I’m sure there will also be some SOWER socializing! All in all, I’m thinking it’ll be a good couple of weeks.

We shared hugs all around, and set out right on schedule from Josiah’s house this morning. 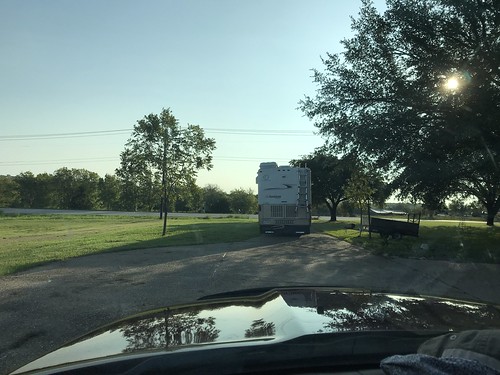 We were first in line at then inspection station 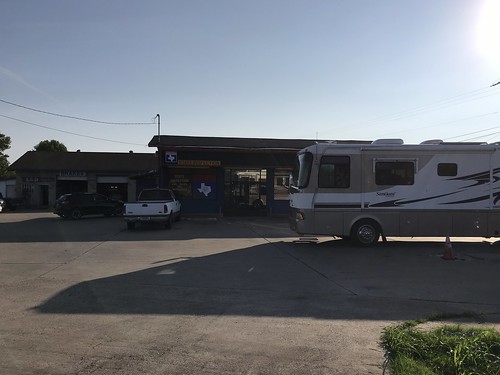 and we passed with flying colors. (To my Pennsylvania friends – the inspections here in TX consist of making sure the lights work, the brakes work, the wipers work, the horn works and you have current insurance. Total cost – $7.00. Quite a difference from the PA inspection system!) But I digress…
We stopped at a diesel repair shop to have some ‘codes read’ to help figure out an intermittent sputtering/missing problem we noticed on our way to Waco. And that’s about when our ‘best laid plans’ took a detour. It turned out they couldn’t actually do the diagnosis until after lunch so we decided to make the most of the morning and took care of a chore – doing the laundry! Then we enjoyed lunch at a favorite lunch spot (from when we were doing the Parrott Ave renovations last year). Once we got back to the rig, they were getting ready to do the diagnostic. But first I had to empty out the closet (Oh, the joys of have a diesel ‘pusher’). No pictures of that – it’s too embarrassing! 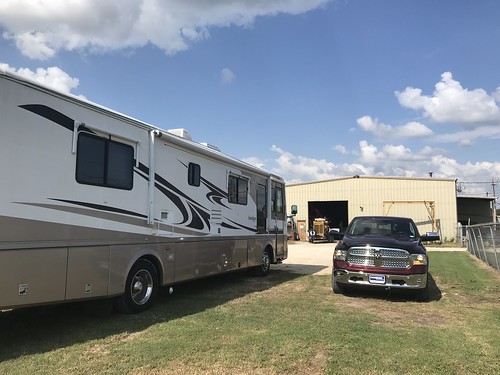 The tech spent a lot of time checking things, but in the end everything looked fine. He loaded us up with a new computer program for the engine, took the girl for a nice long test drive and everything checked out. Of course, by that time, it was closing in on 5PM so they told us to come back tomorrow to ‘settle up’. (Gotta love Texas!) We found a nice pull-through RV spot at a local campground on Lake Waco, and tucked in for the night. Hopefully, after we stop back at the garage to pay our bill, we’ll soon be on our way! Again.
It certainly wasn’t the day we planned, but it started with hugs, included clean clothes, a good check-up at the diesel doctor, some yummy food and ended with a lovely sunset. 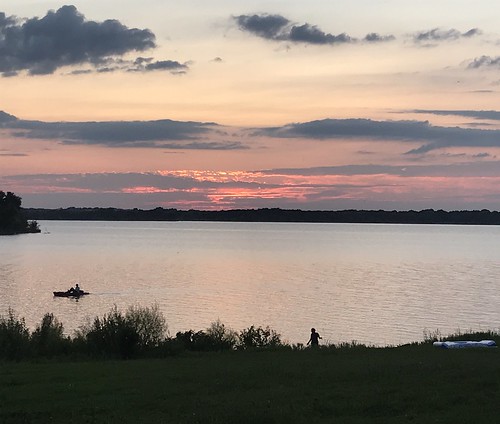 We really can’t ask for more than that! Thanks for coming along for the (non) trip!

It was beautiful like New Hampshire, and is a kissing cousin to the Blue Ridge Parkway, but the pictures were from the Skyline Drive in Virginia. Here’s the original post –

The Good –The Skyline Drive is breathtaking! The weather was less than perfect, but the drive up to the Skyland Lodge – the highest point of the Skyline Drive at 3680 ft was spectacular. A camera cannot begin to take in the splendor of the mountains decked out in their fall color, but here are a couple of shots – but if you want more, go here!

The Bad –
When we started up Lizzie after our stop at Skyland, the gauges were all wacko. The gas gauge was at E, and the low coolant light was on. We had filled up just before we got on the Parkway so unless we somehow sprung a leak (and there wasn’t any evidence of that) we had to figure that was just a gauge glitch. But the puddle of coolant under the engine told us the “low coolant” light must be telling the truth. Gary checked for leaking hoses but everything looked intact. We filled up with water (it continued to leak out) and we headed back down the mountain. We got off at the first opportunity and called our Emergency Road Service guys. We limped to a Walmart and were then rescued by a BIG Tow Truck. Right now we’re in Broadway, VA waiting for the shop to open up tomorrow to diagnose (and correct!) the problem. Gary thinks there’s a hole in the radiator and it will probably need to be replaced. Yikes!
Here’s Lizzie taking a ride…… 🙁 As I was looking through the photo archives earlier this week hunting down photos of Jim and Lillie, I came across a set of photos from back in 2006 that brought back lovely memories. Can you guess where we were?