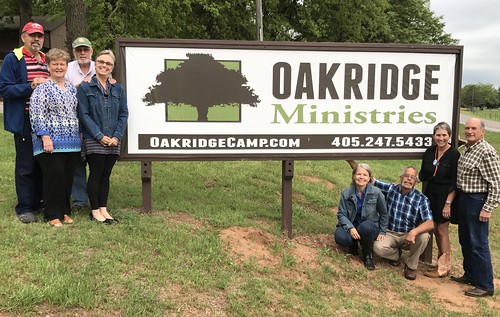 Time with the Kids in Ohio – April 28 – May 8
Snuggles and giggles and swing sets and gymnastics and ballgames. So good to spend time with these littles and their parents!

END_OF_DOCUMENT_TOKEN_TO_BE_REPLACED 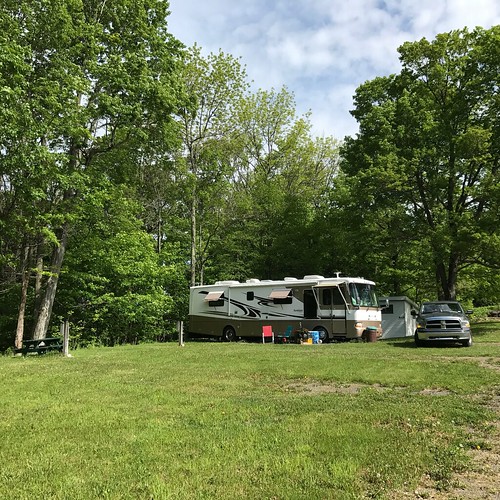 The last 8 weeks have been about as fabulous as possible, filled with family, friends, and frivolity, but right now nothing is feeling quite as lovely as being home.
My own bed.
My own shower. (yes, it’s small, but it’s mine (ours!))
My own clutter.
My own stuff.

It’s past time to get my life back into some sort of routine, back into taking care of life business, and back into SOWER work. While I’m working on making all of that happen, I’ll just share a time-lapse of Gary and I building some ductwork for the project here at Montrose. You’ll just have to imagine the racket that was involved! 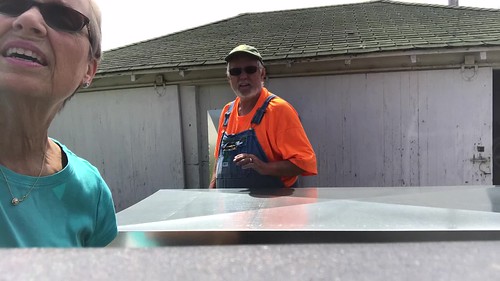 And now I’m off to do some Cruisin’ Musin’

….I do a little blogging, right? Although I still have to put together a post about our wonderful cruise – 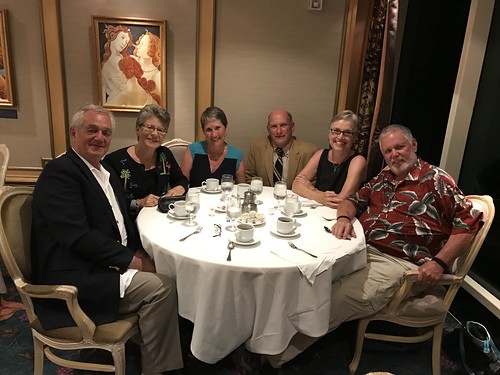 and then catch all you’all up on our April project at Oakridge Ministries in Anadarko, OK. 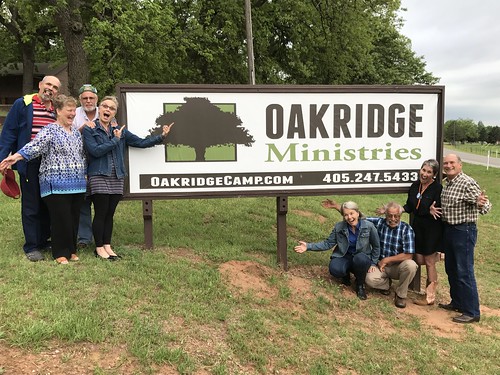 I thought I’d do a little real time update, instead.
We left Anadarko bright and early Tuesday morning.

We did have a small concern in that the “Warning” light on the dashboard came on just as we were starting out. It doesn’t actually tell you what’s wrong, just that SOMETHING isn’t right. All the fluids were good, and she was running fine, so we opted to drive up to Oklahoma City (about 45 miles) and get it checked out there. 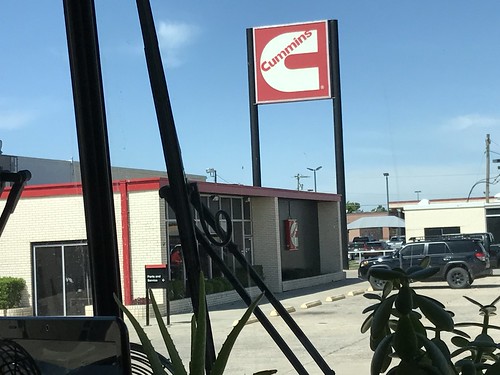 We made it without incident, and they were able to diagnose (and replace) a failed transient suppressor (you wanted to know, right?). That’s the good news. The bad news is that they spotted a potential problem with the “#3 Exhaust Gasket” – it had a leak and there was possible damage to the manifold. However, since they couldn’t fix it until next week sometime, we opted to continue on and get it looked at (a second opinion is always a good idea anyway when $$$ is involved) in Ohio since we’ll be there for over a week. (Are you glassy-eyed yet?) Sooooo…..
With the 4 hour delay, we only got to the Missouri Welcome Center before we stopped for the night. Not quite as far as we had hoped, but thankfully we had no additional mechanical issues.
This morning we started out in the rain – 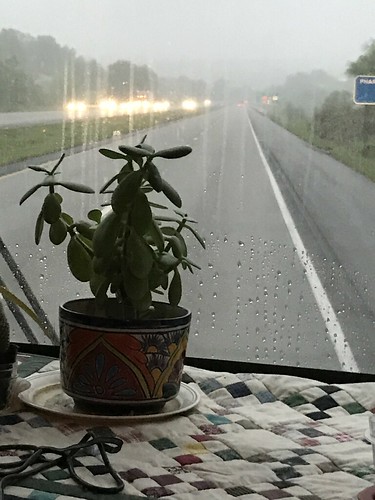 and it pretty much rained all day, all the way. 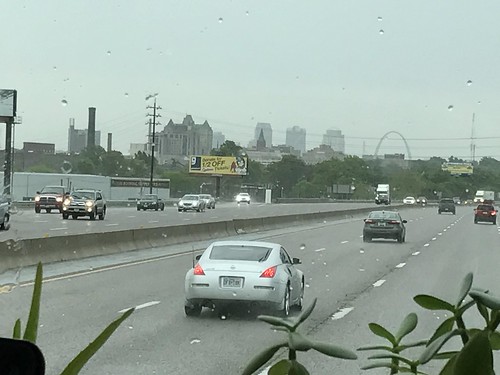 Eight Hours. Driving in the Rain. Ugh. But we made it most of the way across Illinois and, Lord willing, we’ll make it to Columbus (or at least to the diesel mechanic) by the end of the day tomorrow!!

As I type this, we are sitting in a Walmart parking lot in Effingham, Illinois watching it rain. 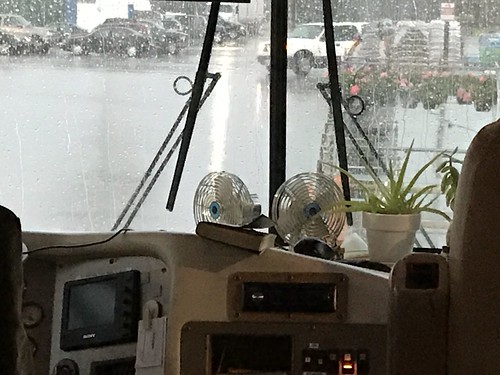 (And listening to PSA’s about severe weather warnings. What county are we in again? Do we head into Walmart if it gets too crazy?) 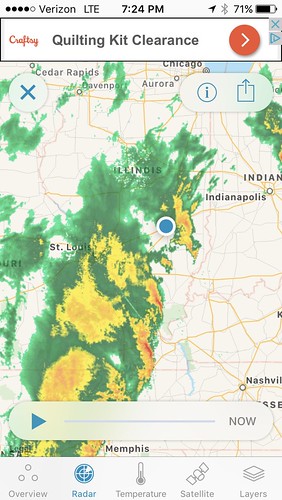 We’re the blue dot – and let me say, that green blob has been with us all day!!! We can only pray that it will be long gone in the morning!

I’d like to say that I’ll be catching up soon with Cruise and Project posts, but the truth of the matter is after tomorrow my days will mostly be filled with kids and grands. And once again, blogging will get placed on the back burner! (But that’s really how it should be, don’t you agree?)

Thanks again for stopping by!

Now some of you might be wondering just what a “Round-up” is. Well, in our SOWER world a Round-up is simply a gathering of SOWER friends – both old and new for a weekend of fun and fellowship. Here is a little write up done by my good buddy, Kim, that went into the April eNewsletter –
GOOD MORNING TRINITY PINES!!!! was the familiar call to order before daily morning devotions at the March TX “Round-Up”. Host Trinity Pines director Phil Springer, as well as Forest Glen and Camp Cho-Yeh directors each took a turn leading devotions, blessing, inspiring and challenging us through the Word and personal testimonies. And as if that wasn’t enough – gregarious games, fantastic food, titillating talent, cozy campfires, melodious music, an amazing auction, tremendous Trustee/Office Q&A and SOWER family fellowship rounded out our days and evenings.
So let’s just unpack that a bit…..
Gregarious Games
Oh my! Everything from toilet paper races 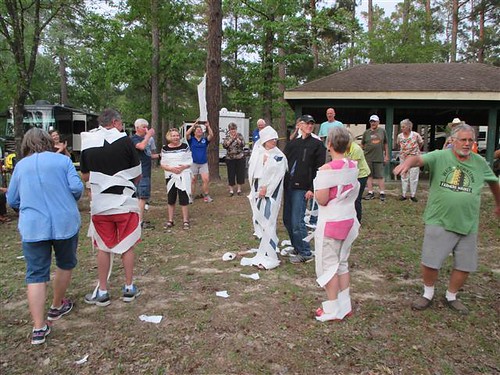 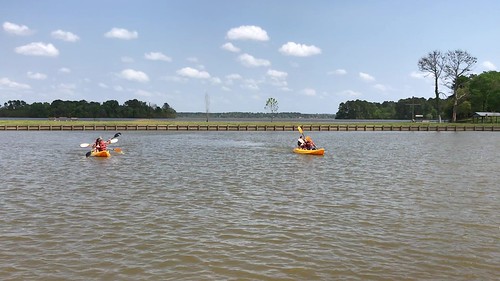 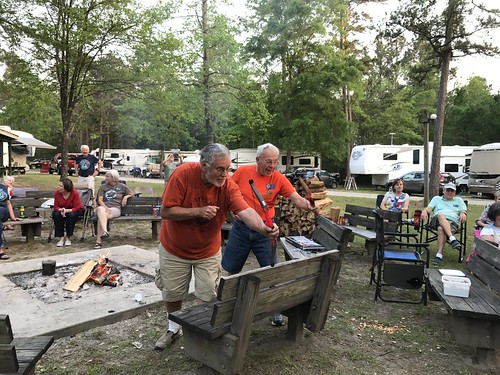 to a game of hot potato with an ice ball (I asked for an ice-breaker and they took me literally!) 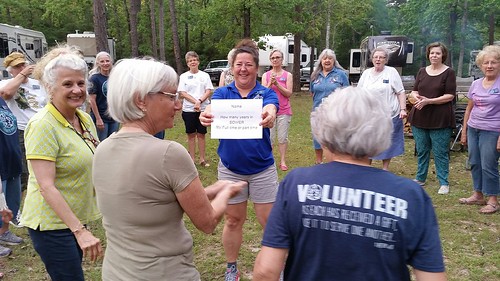 EVERYONE had a good time with the wide variety of games that we played!
Fantastic Food
From the hot dog roast that started our event 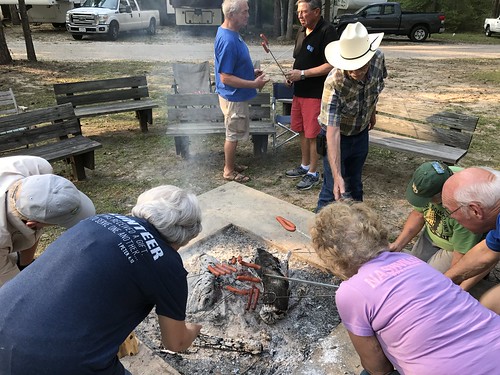 to our delicious meal at the dining hall 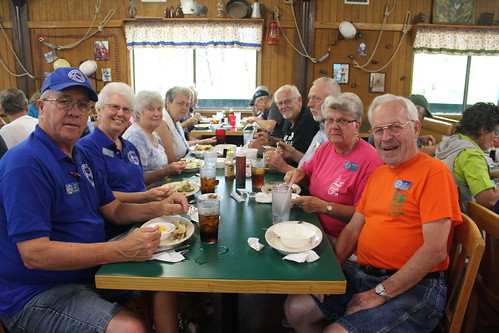 to our always favorite pot-luck dinner 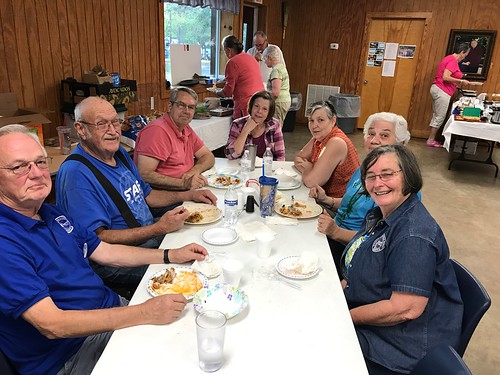 no one can say they went home hungry!
Titillating Talent
A favorite event of any Round-up/Rally/Reunion is the Talent Show. Serious 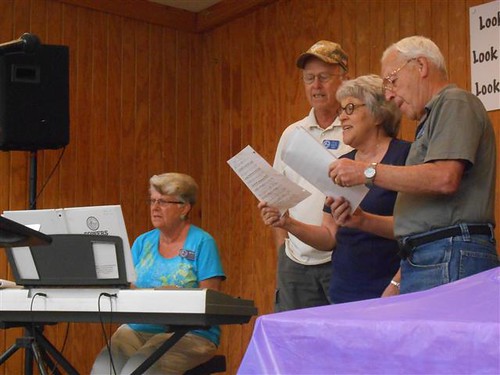 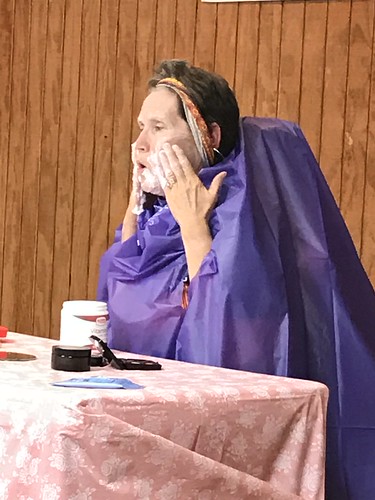 all talent is welcome! What fun we had!
Cozy Campfires
We kept the campfire going from early morning for the coffee crowd 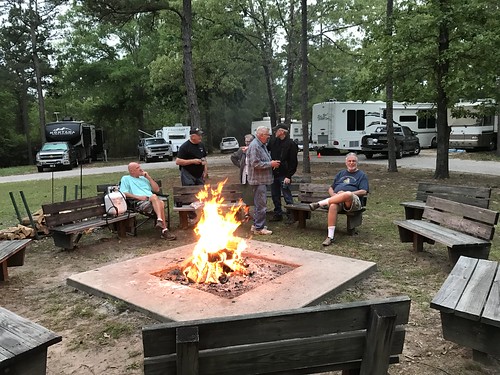 till late at night. 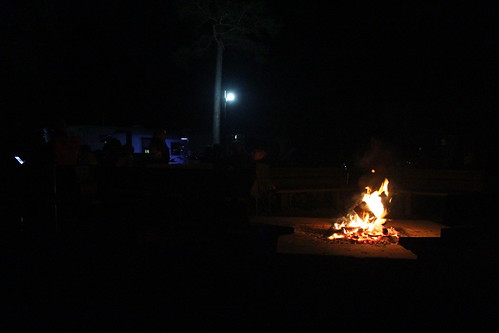 We even enjoyed a movie night under the stars – 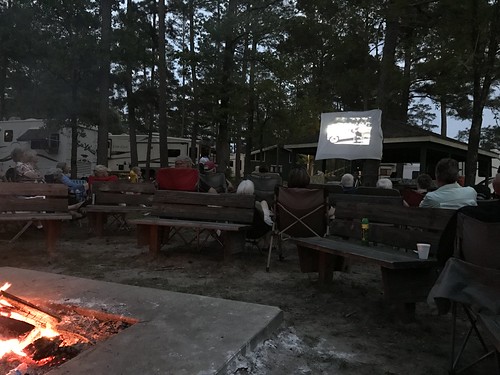 (Nothing’s quite as fun as a group of seasoned RV’ers watching “The Long Long Trailer” with Lucille Ball and Desi Arnez!)
Melodious Music
We all enjoyed a time of praise and worship each morning, and even managed to put together a couple of “Choir” numbers! 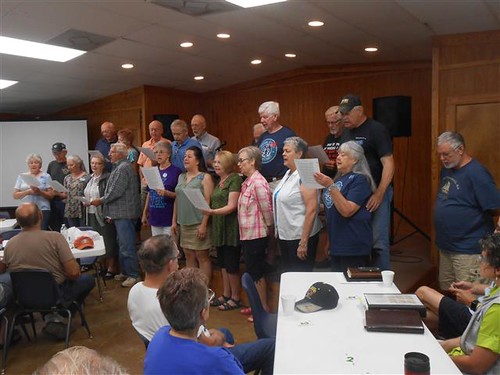 Plus, there is nothing quite as stirring as 60 SOWERS singing our official SOWER Song – Our Best 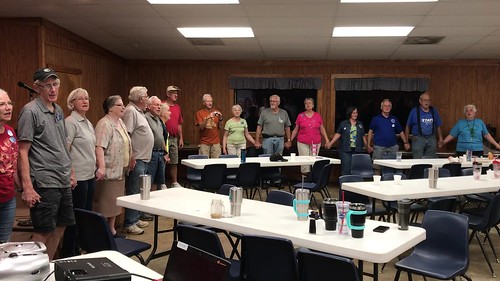 Amazing Auction
A long standing tradition at a SOWER Round-up is the auction. This year was no exception! 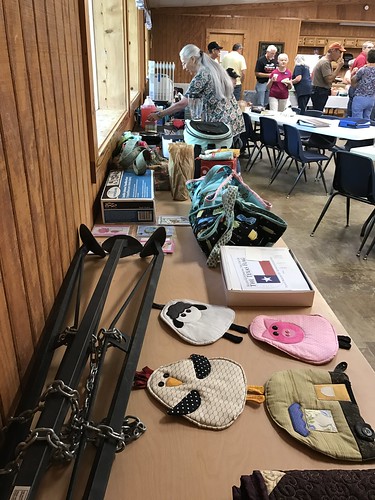 We had everything from essential oils to homemade sticky buns to RV equipment to adorable potholders! No pictures of the auction itself, but we raised over $3200 for the SOWER ministry so we think that’s a pretty good thing!
Tremendous Trustee/Office Q&A
Every SOWER Rally also likes to include a Trustee Q&A. This year we had two board members, Jenny and Kim, along with our two office staff, Ray & Alean. It was a great chance for folks to ask any questions about our guidelines and offer suggestions to help improve our ministry. 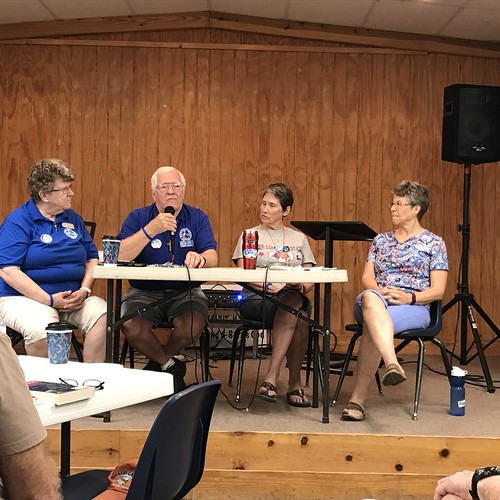 It’s always a profitable time!
And finally –
SOWER family fellowship
This is truly what a SOWER Round-up is all about. Connecting with new friends, reconnecting with old, and being reminded again (and again!) what a wonderful family we are all a part of. 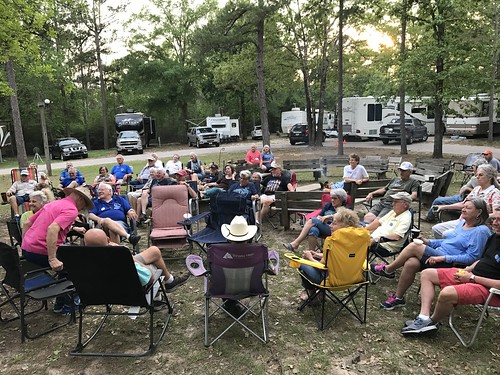 It was a stellar couple of days – we are so very blessed to call these folks brothers and sisters in Christ. Our Family! 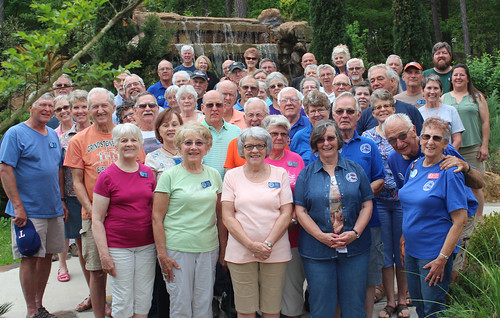 There are additional pictures HERE if you’d like to check ’em out.

Or, if you have a couple of minutes, some should scroll through below!

Is it Tuesday already? Although we have returned from our Oh-So-Fun Cruise

I am no where near to being caught up on my life in general. We have arrived at our April SOWER ministry/project and are getting settled (and catching up on emails, etc.). Before I can share about the monkeys and zip lines and snorkeling adventures, I need to organize and process the photos from the SOWER TX Round-up. 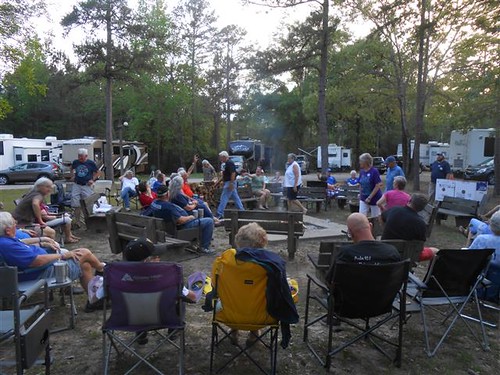 And before I can do that I need to put together the SOWER newsletter (already past the deadline).
So – this little mini-post is just to say Hi – and I’ll be back soon. Honest! 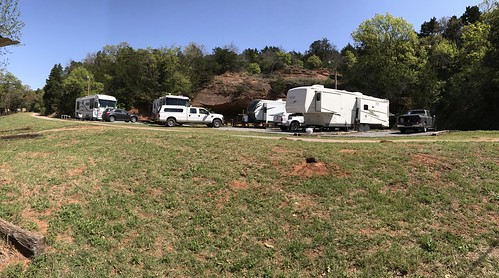 Our new neighborhood (that’s us behind the white truck). =)