Frustration!!!
I had big plans to finish the month strong, but my internet options are not being at all cooperative. I know, I know, it’s totally a First World Problem, but I’ve resorted to doing this on my phone (which has its own version of slow loading issues). I have yet to perfect my tiny keyboard typing, so this will be just a short farewell to November 😢 – sorry to see you go but I’m sure December will be full of joy too!! 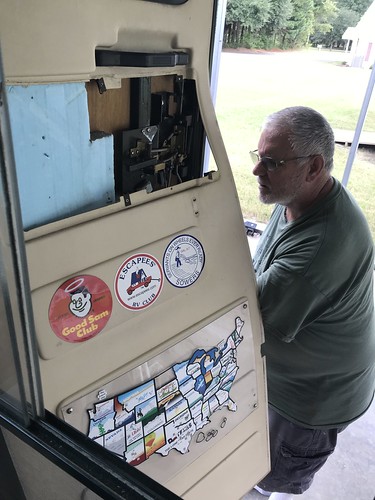 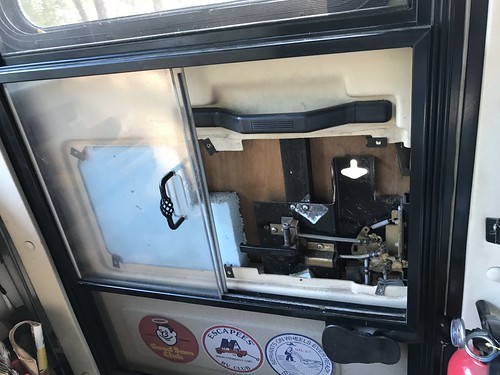 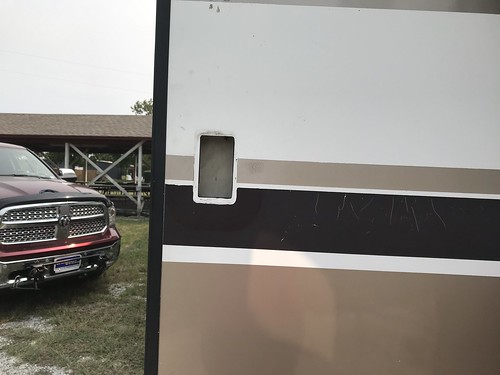 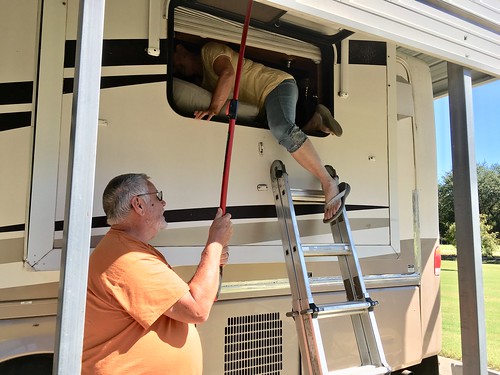 Today was another ‘on the road’ day for us as we officially moved from our November project in Mississippi to our December project in the FL panhandle. Here’s what I wrote over on the “So where are we now?” page –

We worked at this location on our fourth SOWER project, back in March of 2005. Wow – over 15 years ago! After that first time we returned for two other winters as an SOA (SOWER on Assignment – extended months usually for a particular purpose) to help set up the air conditioning in a new building. Although we may have stopped by a time or two, the last time we worked here was May 2008. So while some things seem familiar, others (like almost all of the staff and of course the boys!) will be new to us! And we do like that aspect of things. Hopefully we’ll get to connect with some friends from those good ol’ days and get reacquainted with the area. I’m counting on it being another blessed month!

We getting settled after a full day’s drive and looking forward to doing a bit of exploring over the weekend. Or maybe we’ll just take some naps! But this I know – no alarms for the next two mornings! Yippee!

Oh – Here are the answers to Wednesday’s geography puzzler. Sorry, Doug, you only got 50% correct! But thanks for guessing!

Remember those old song lyrics – Signed, sealed and delivered?  Our job this week was similar except that thankfully we didn’t need to sign anything, and we’re leaving it up to the USPS to do the delivering! We were Stuffing, Sealing, and Sending! 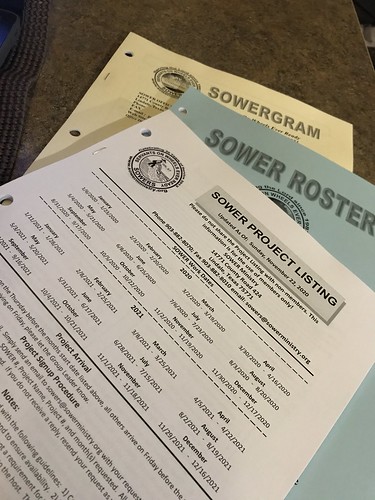 Thankfully both the Roster and Sowergram were already printed and the only remaining piece of the puzzle was the PLS. 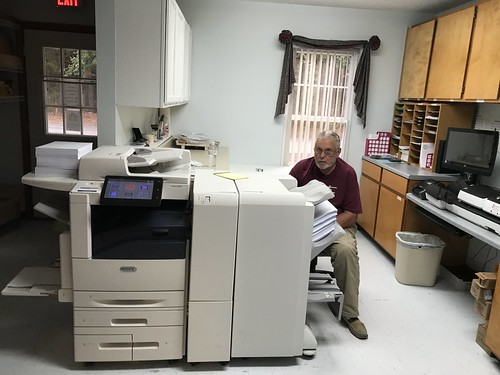 (Side note – this is a pretty amazing copier/printer! It spits out entire booklets, stapled with the holes punched. And if there is a color cover and back, it knows to put that on too! It’s been a long while since I’ve been in the presence of such copier wizardry!)
Once we got all the PLS’s printed we collated our items into sets. Lots and lots of sets. 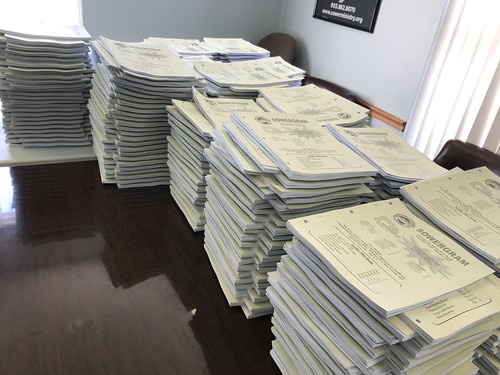 Once the envelopes were printed with individual addresses, it was time to get stuffing. 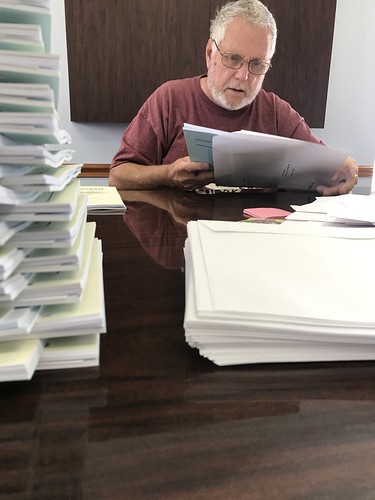 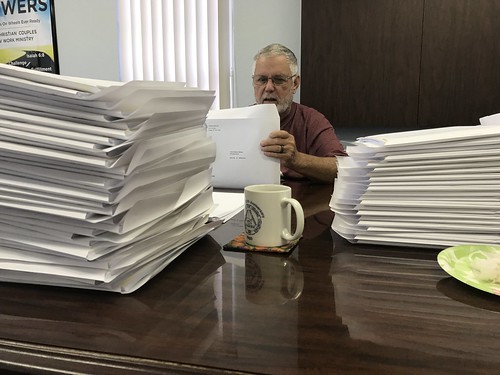 Since these were such robustly filled envelopes, we couldn’t count on the automatic sealer on the postage machine to do the trick, so after they were stuffed we got to seal them. One.at.a.time. No pictures of this because the sealer was also the photographer. But you can see my little paper plate in the above picture that held my little paper towel sealer. Yes, this was true old school sealing – just a step above the old lick and press technique!
The best part of stuffing and sealing all of the envelopes was seeing the names and reminiscing about the times we’ve served with so many of them. I wish I’d had time to stick little notes in them just to say hi!
After sealing came the postage-ing. 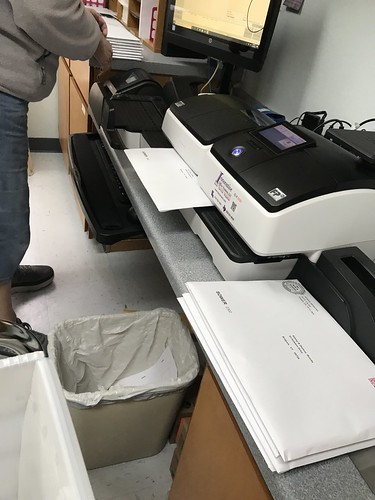 Again, due to their bulk, they had to be fed in individually and like all machines, that machine did throw a couple of tantrums during the course of the job. But in the end, they were all stuffed, sealed and heading to the Post Office! 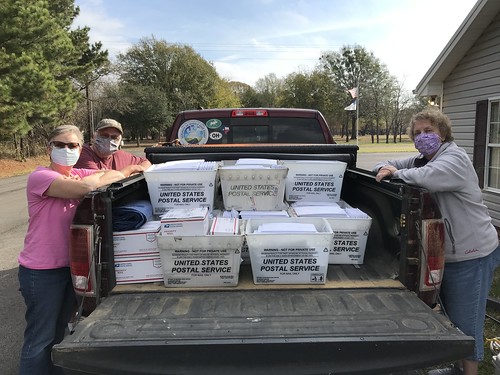 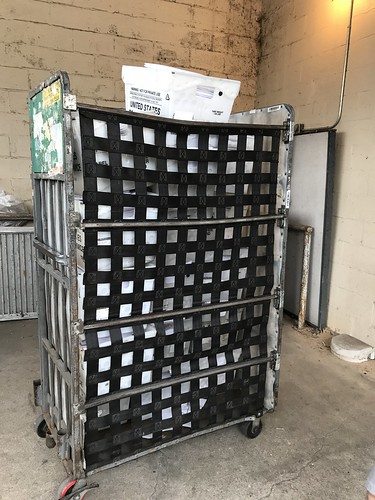 SOWER friends, we’ve left them in the hands of the USPS. They’ve been stuffed and sealed with love and prayers – and now we can only pray that they find their way to you!!

While we were busy collating, stuffing and sealing, Toni and Dick (the official (and amazing) office subs were busy handling all of the routine office task. Though with all of the COVID complications coming at us, I’m not so sure any of it was routine! Thankfully they will be able to stay until the Christmas break so Ray and Alean (the regular office staff both recovering from COVID) can get fully recovered before they return to work. Our ‘job’ here is done – and we’ll be heading back to Mississippi and our sweet home in the morning! So glad we were able to practice our flexibility to come and help!

Today’s memory is from long before any of us had even heard of the word “Blogging” – probably before even the internet. It was the year that, unbeknownst to me, I was on the cutting edge of culinary deliciousness when I introduced a “new” vegetable to the Thanksgiving menu. 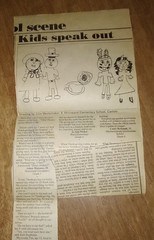 What Thanksgiving Means to Me
Abigail Fitzpatrick, age 10
Grade 5

To me, Thanksgiving is a really special day when we all thank God, the creator, for everything we have and all the blessings that he has given us.
One year I went to my aunt and uncle’s house for Thanksgiving. My Gramma was there too. So was my other aunt and uncle. We could all smell the yummy food cooking and being made and taken out of the oven.
Then we saw it – the horror of our lifetimes! Brussels sprouts!
“Acckk!” we all thought to ourselves.
“Do we have to eat that?” asked my 9 year old cousin Jos.
“Yes, you must each have one,” said my Aunt Stephanie.
My cousin Tim, age 13, tried to give his to Cricket, my aunt’s dog, but the dog was smart too.
So we ate the rest of the yummy food and tried to bear the horrid taste of the Brussels sprouts.
In spite of the Brussels sprouts, Thanksgiving really means a lot to me.
Abigail Joie Fitzpatrick, 10

Abby is now the mom to five sweet kiddos, and while I cannot attest to whether or not Brussels sprouts are ever on her kids plates, I do know that kale makes regular appearances. I must not have done too much damage!