Has it really been almost three weeks?  I’ve been trying to find the words to catch you all up on why I pretty much disappeared over the last three weeks, and while I’m not sure I have them even yet – here’s at least a start!

Friday, the 25th, I was getting ready to put together a Final Wrap up of our time at Lake Swan Camp when I received a text message that my sister, Elna, had been admitted to the hospital with a brain bleed. For someone who has been battling cancer (and mostly winning)  for the last four years, these were hard words to read. And suddenly writing about painting those brown benches brown faded into the background and I was searching for flights to New England!  Unavailable. Unavailable. Unavailable.  In God’s providence, Elna’s daughter Heather was also in Florida and heading north post haste. So we loaded in the car and the three of us (that’s Gibson in the back seat) pointed that little Honda towards Vermont and we drove. 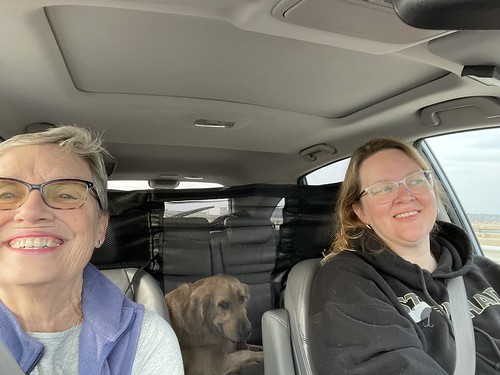 And drove, and drove, and drove. Thirty-six hours later we were at Heather’s (about 2 hours from Elna), and ready to finish up the drive in the morning. We couldn’t get right in to see Elna – the visitor policy only allowed one visitor per day – but we met with Henry for breakfast and got the update. 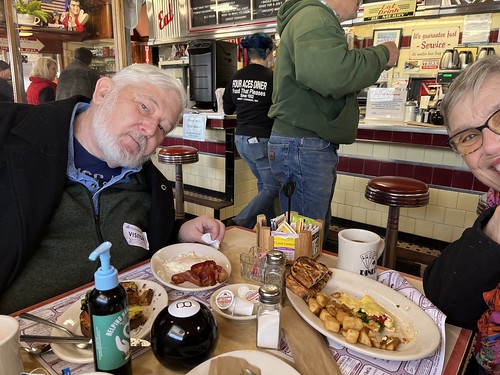 Elna was in Neuro ICU, and following an MRI they discovered three brain lesions (tumors), one of which had ruptured and caused the bleed. She was awake and doing as well as could be expected following her diagnosis. I was desperate to see her, but had to wait my turn, so by the time I got in to see her (Wednesday) she was doing much better. 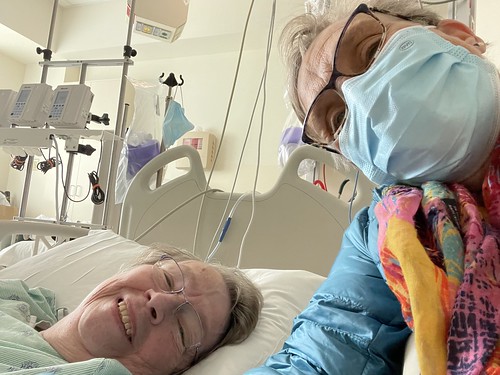 She was still having difficulty processing the written word, but ‘with-it’ in most other areas. We were so thankful! Although the visitation was limited to one person per day, there was no limit to how long we could stay. That Wednesday and then Friday were very precious days and we often just sat quietly and enjoyed the love that passed between our joined hands. (That is not to say that it was easy for her to get a good nap with all the comings and goings of the doctors and nurses!) Friday afternoon she was transferred to a rehab center to help her get stronger and ready to go home. Her daughter Bethany arrived from Utah for the weekend – another boost to her morale and well-being! And then just two days ago, she came home to complete her recovery. Praise God! While I left on Monday last week (while she was still at rehab), Joie picked up the sister mantel on Wednesday, so she was well covered with Sister Love during her hospital stay and rehab time. 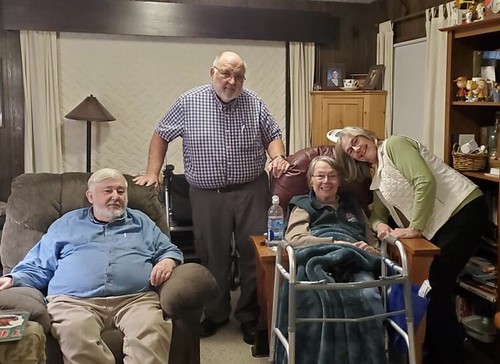 Although Joie returned to PA today, we left her in the capable hands of her hubby, her granddaughter (who lives with them during the week), our niece Chris (Joie’s daughter who lives in the same town), and daughter Heather who is about 2 hrs. away. And most importantly, in the hands of our LORD,  who loves her even more than we do!
Right now her job is to rest and get stronger. Once her brain gets happier (the doctor referred to it as ‘angry’ following the brain bleed), they’ll do another MRI and then will be able to address those tumors with some targeted radiation. The prognosis is good for this incident, but it has been a vivid reminder that yes, she has stage 4 cancer and every day is a gift. We are so thankful for our time in New Hampshire just last month. How kind our God has been to us!

There’s more to the story, of course. More of God’s hand and blessing in the midst of these uncertain days.  But these are enough words for tonight.

because as of today this is happening. 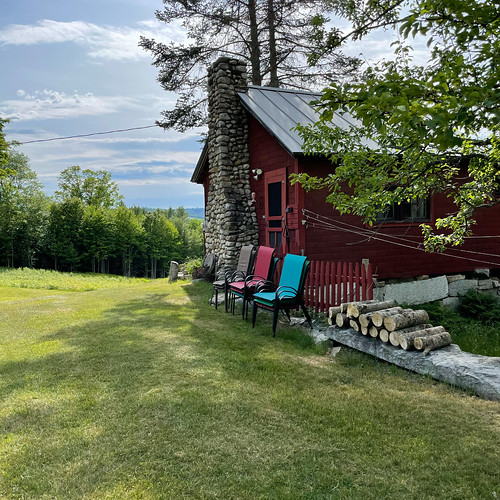 And once THIS (the cabin) happens, often this (the blogging) doesn’t. But you never know – I kinda feel like there are still some words inside that might need to come out! Just not tonight!
Sending sweet dream wishes from The Cabin…..

…to get this blog back on track!

The Cabin Vacation has drawn to a close, and following one day of vacation recovery (that’s a thing, right?), it’s time to get back to real life. The bank statement has been reconciled, the credits cards are on auto-pay, and the oh-so-dry dashboard plants have been watered. And watered again!
But before we get TOO involved in real life (I still haven’t been able to watch more than 10 minutes of network news), let’s do a bit of Cabin Recap! 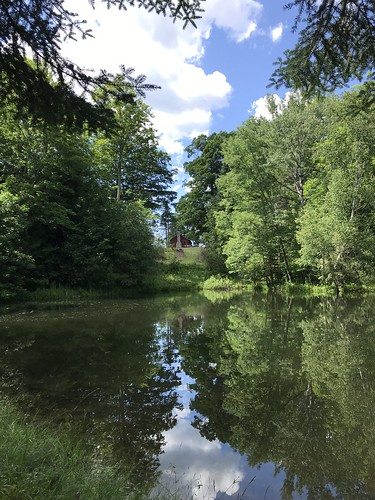 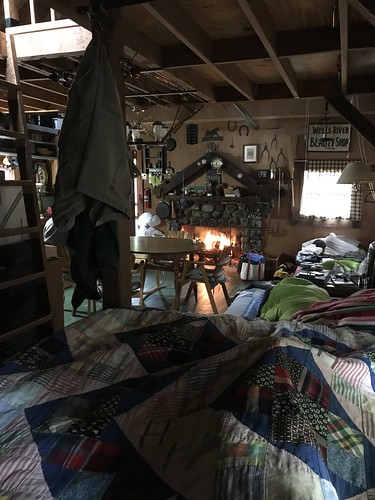 Since I was also vacationing from blogging during our Cabin Time, it’s really hard to consolidate all the goodness into a single post. So let’s just say that Gary was quite productive –
Finishing up the dock 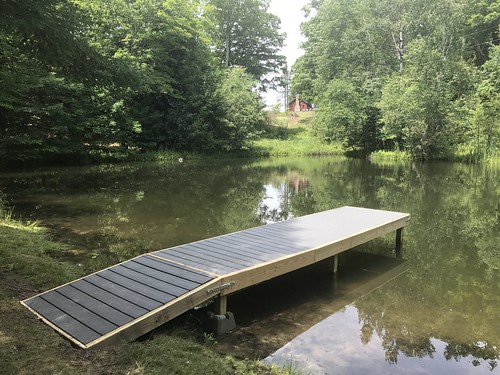 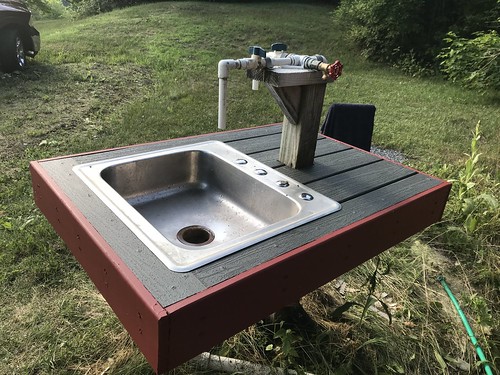 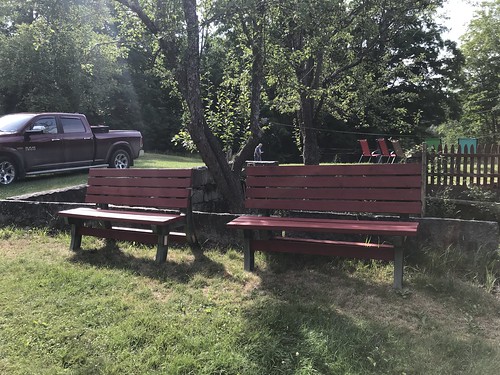 and got the firepit burned! 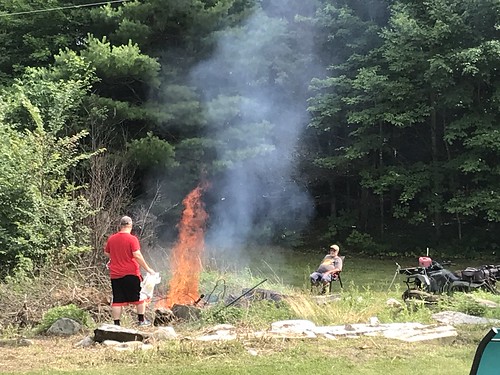 I’m also happy to report that he got three books read and took any number of naps. Here is a rare shot of him actually sitting down…. 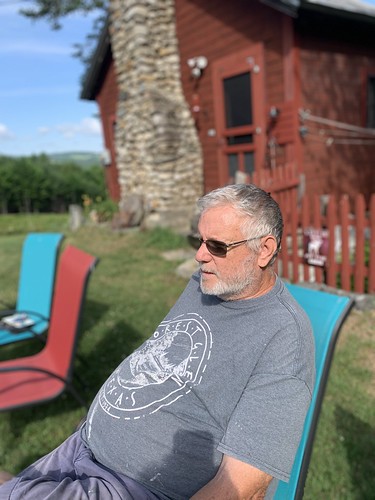 I, on the other hand, managed to keep the hummingbird feeder filled (gotta keep those little guys happy) and generally stayed on top of the dishes and planning trips to get ice cream. Hey, don’t judge me!
We had time with friends and family and to finish off the vacation in grand style, we were able to overlap with our Texas kiddos for a couple of days! Whooohooo! 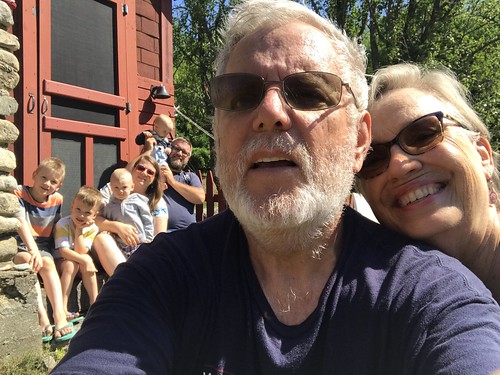 We don’t often get to the cabin in July so it was fun to experience it during the height of summer. Sadly, we won’t be able to get back again this year, but we’re delighted to know that the rest of the season is well booked by other family members (some for the first time!). I may have others “Cabin Things” to share as the days go by, but for now, here’s a little slide show (in no particular order it seems) of some of my favorite pictures from our cabin time.

Thanks for stopping by – and for your patience during my little blogging break!

From the first walk to the outhouse 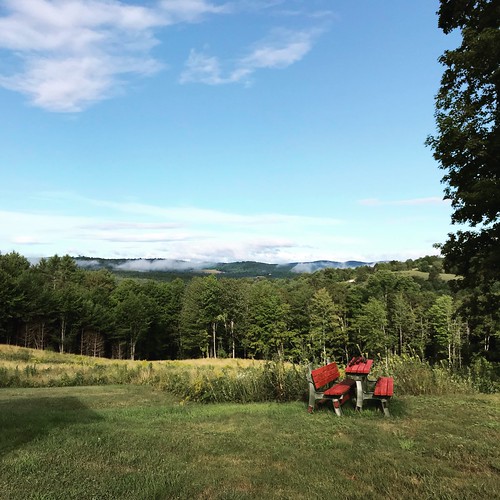 to the last glimpse of the setting sun 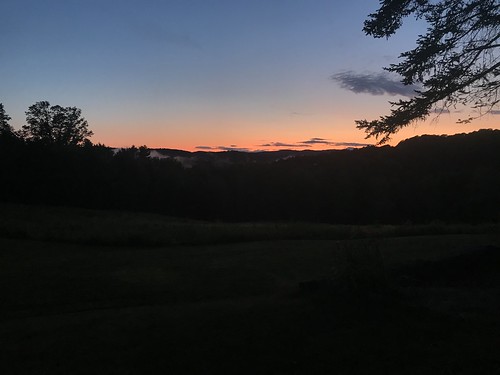 and every bit of the day in between 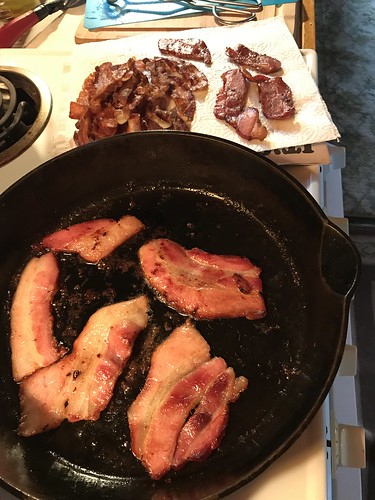 it was grand first day at The Cabin!

One of the things I’ve been trying to do every day is take a nice long walk. (After all, the call of the ice cream stand in town is LOUD). 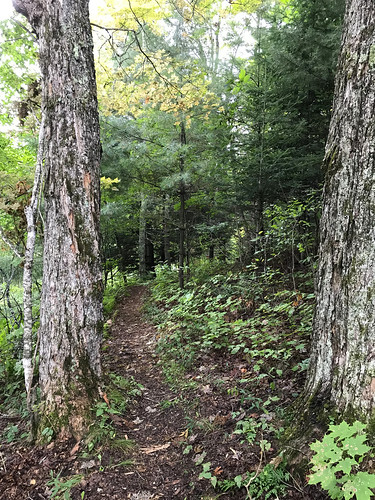 As I’ve been taking these walks I’ve been delighted to find, if I take my time and look closely, a lovey variety of mushrooms and other forest treasures.
This one looked like it could be used as the swimming pool for some teeny-tiny fairies. 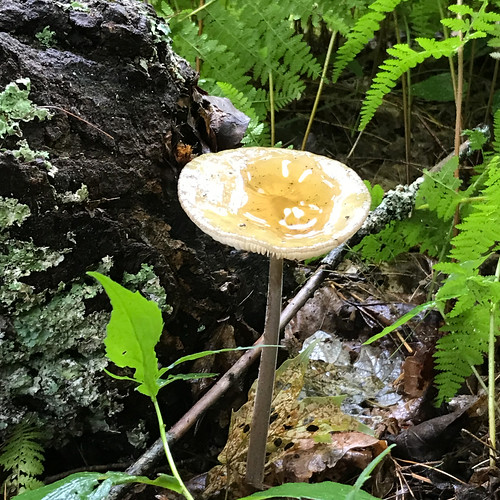 This little community seemed to doing a little urban sprawl. 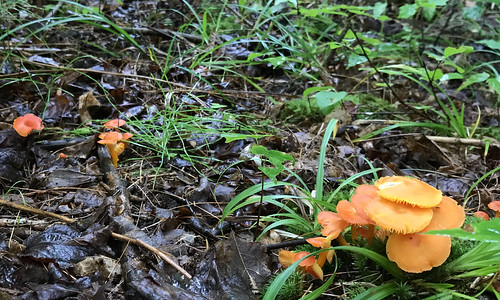 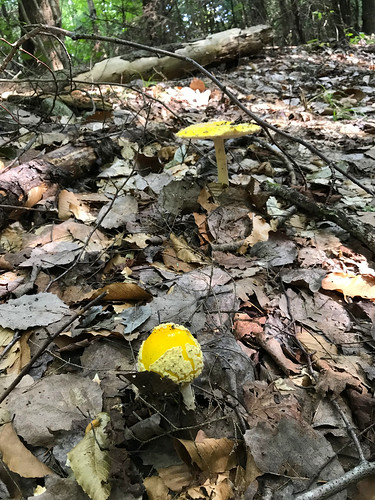 This pure white one was all by its lonesome. Well, as far as I could tell, at least! 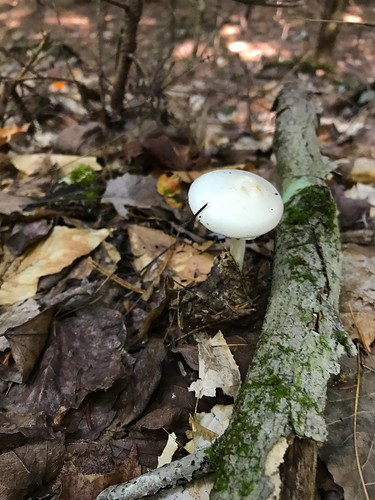 At first I thought this was a slice of wood, 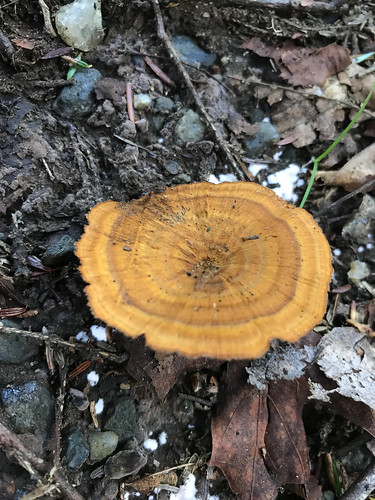 but sure enough, there was the stem! 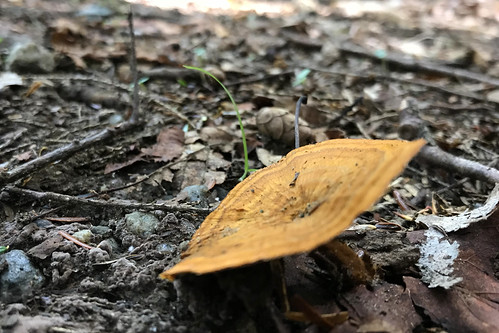 I’m not sure if this would be considered a mushroom or a fungi. Or something else entirely! 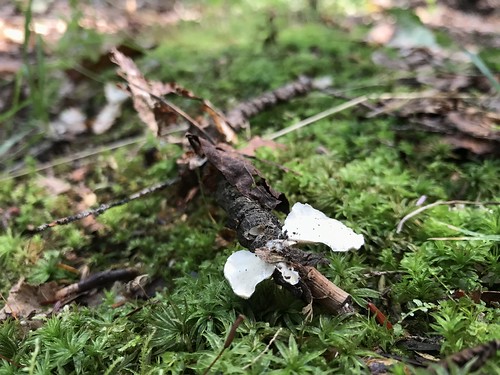 This little family was no bigger than my index finger. So tiny! 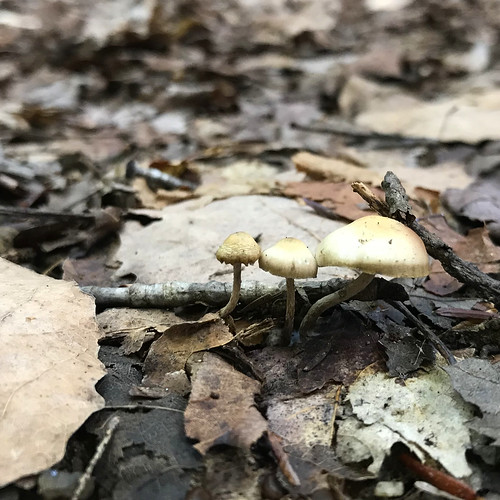 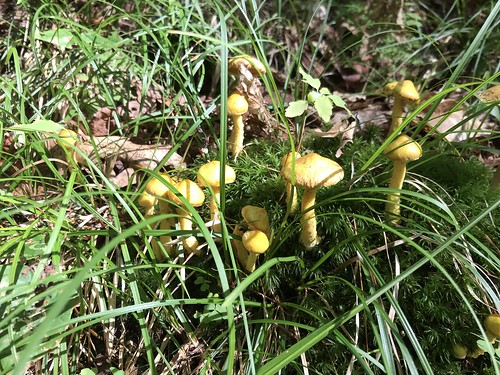 And then there was the mother of all mushroom logs – 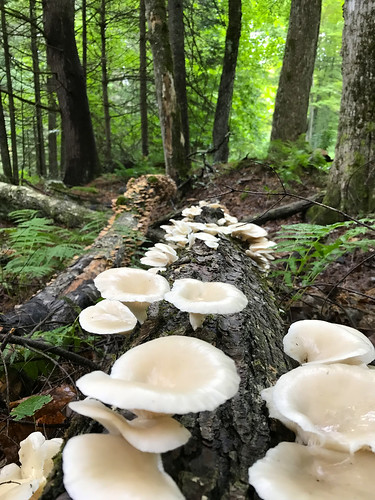 which even came with its own tiny fauna. 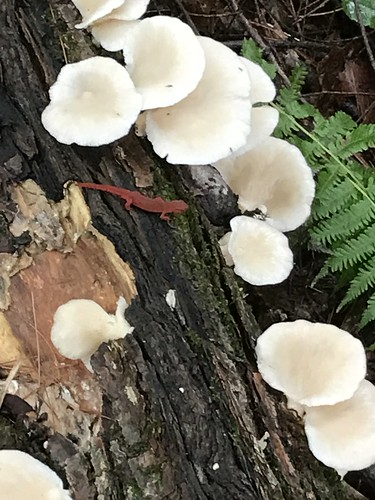 I’m sure I’ll find other forest treasures as I explore in the days to come.  And I’ll do my best to keep you in the loop!

P.S. Any idea what those things are on the tree on the left? 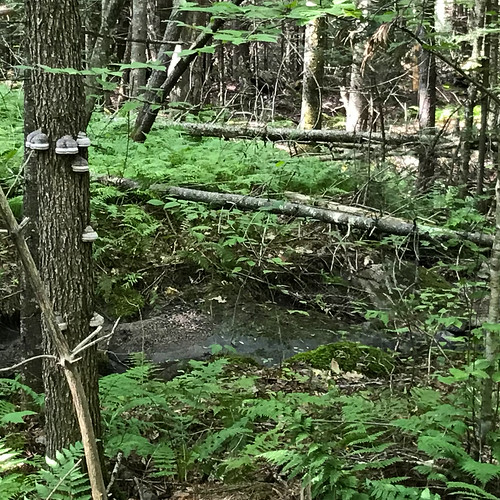