But there is still plenty to do!
We’re down to the last couple of days here at Prescott Pines Camp – and I thought I’d share a little about the camp and what we’ve been doing here.
Prescott Pines Camp, like many of the facilities that we work at, is a multi-faceted conference center. They have a great summer camp program, which centers around Frontier Town – and comes complete with teepees (tipis?) and rustic cabins. There are zip lines and challenge courses and of course a pool. In fact, they even have a Human Fooz Ball court – (We’re running across them more and more. One of these days we might even get to see someone PLAY Human Fooz Ball!)
The other side of the camp is still rustic, but much more civilized. There’s a lovely chapel – and cabins and dormitory style buildings to accommodate men’s and ladies’ retreats and winter youth retreats along with Outdoor Education Classes from local (and not so local) schools. This place is busy all year around.
But truth be told, they had a very rough winter. The weather was especially harsh, storms were longer and meaner, and parts of the camp were severely damaged. One of the staff houses caught fire and sustained enough damage to render it unusable. A large pine fell into the dining hall, taking out a large portion of the roof. The septic system literally floated out of the ground after an especially wet stretch of winter weather. Pipes burst, trees fell, insurance was ornery. But through it all they could see the Lord’s gracious hand. No one was injured in any of the calamities. Since the roof now needed to be replaced on the dining hall, it made for the perfect opportunity to do some much need expansion and improvement (the original dining hall had been constructed in the 40’s I think). Not all of the work would be covered by insurance, but it was a good start. The septic system was needing an upgrade too, and since it was already mostly out of the ground…. you get my drift. God has been providing resources and enthusiasm and for the last several months He’s also been providing SOWERS to help with the various projects. 🙂
We worked hard this month – the guys were busy doing all kinds of things, from moving walk-in boxes to moving landscaping, to digging ditches and building sheds. They even got to help with some of the dining hall interior demolition. One of our group this month is a heavy equipment operator, and he has spent hours on a backhoe and a little bobcat. (I personally think he’s been having lots of fun on those big toys!)
Here are some shots of the guys at work – Those boys have been workin’ hard!
But we girls have put in our fair share of work too! We started the week by removing landscaping stones from in front of the dining hall, then moved to cleaning two new-to-them commercial stoves and then tackled painting one of the cabins! The bottom right shot is at the foundation of the house that burned. We were asked to clean up the debris from around the foundation. What a job!
Before – The backhoe guy came up today and scooped up all the debris we had moved from the foundation. I’m not sure what their plans are for this site, but at least now it’s nice and tidy. Well, more tidy than it was anyway!
And I must admit we were quite pleased with how the cabin came out! And all in just three mornings! (Ok, so we just did the body of the building – the trim and deck had already been done. But still….)
Oh, and the dining hall? This is how it looked when we got here (except that the blue tarp and some of the repair boards have been removed)- And this is how it looked last weekend – I think all the building permits are now in hand, so the rest of the demolition and renovations can begin. They were smashing up the concrete floor today. (I’m telling you, those backhoe guys have the most fun!)

And once again, it’s hard to believe that we’ll be back on the road again in just a few days. There have been some challenges this month (one couple had to leave after a week due to altitude sickness), but it’s been wonderful to see so many jobs accomplished. And it will be exciting to keep in touch with the folks here to see how their spring and summer progress. I know that feeding the multitudes in a wedding-type tent is getting a little old! But I know that God will continue to work here at Prescott Pines Camp!

One thought on “Drawing to a close” 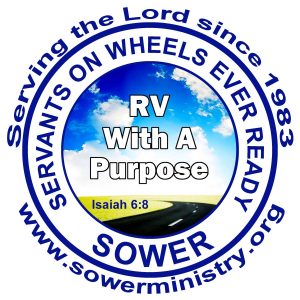