In this highly charged political climate, it seemed quite restful to visit the boyhood home of Dwight David Eisenhower in Abilene, Kansas. “Ike” was raised in this modest home along with his five brothers by his devoted parents (with a little help from a grandpa that also lived with them). Eisenhower was the first president that I have any memory of (he was president from 1953-1961 and I was born in 1951) and I confess that I didn’t know a great deal about him. Well, I knew he was a Five Star General and was HUGE in WWII and that he was married to Mamie and his grandson married Richard Nixon’s daughter. But by the time I left I realized what a remarkable (and humble) man he was. The museum on the grounds took us through his early military career, his pivotal role in World War II, and his reluctant entrance into politics. Did you know that BOTH the Republicans and the Democrats wanted him to run? That’s pretty hard to believe given today’s political climate! The museum also had a special exhibit of the fiber art of Shin-hee Chin that was fabulous! I was working with a different camera, so my shots are not all that great, but here are a couple from the exhibit. A close-up of Anne Frank. Amazing. Not sure who this is, but here’s what it looks like close-up – So if you’re ever near Abilene, take the time to stop and see this wonderful testimony to this Soldier/Statesman/President. We’re glad we did!

The rest of our drive to Anadarko, Oklahoma, (and our November project at Oakridge Camp) was uneventful (just the way we like it!) – here are a couple of sights along the way! 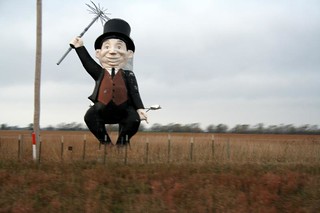 Gotta love a little road art!
And here we are, all settled in for the next three weeks! We’re looking forward to a day trip into Oklahoma City in the days ahead and since Anadarko is the self-proclaimed Indian Capital of the Nation, I’m sure we’ll be enjoying some Native American education too!

Have a good weekend, everyone!