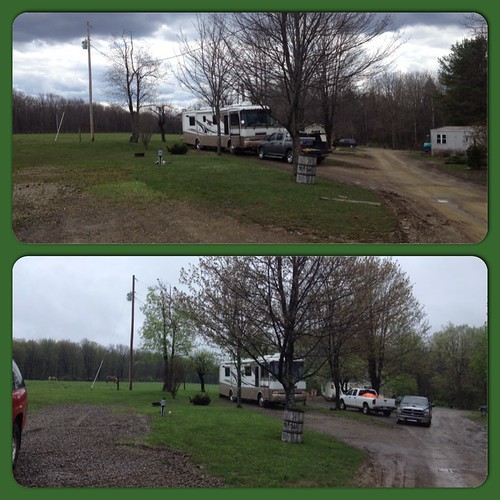 but in between we had a great couple of weeks!

Miracle Mountain Ranch is a western-themed camp and retreat center that is also home to an 11 month discipleship program for high-school graduates. And it was really those hard-working kids that made this project so special.
But first, the SOWER stuff!
Because we had made arrangements to scoot out of the project a week early, Gary worked extra long days and extra days in general to make sure that even though we were only going to be there for two weeks, Miracle Mountain would get (essentially) three weeks of work. And work hard he did! The first week was consumed with chipping up tile. It was a mystery (that thankfully has been solved), but the tile in the newly finished men’s bathroom was popping up. It all had to come up and get cleaned up, and the floor had to be made ready (again) for the tile installation. 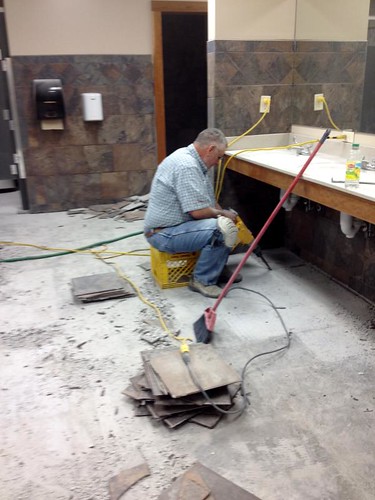 It was a long, noisy, and dusty week, but by the end of it the room was ready to be re-tiled. However, since they hadn’t figured out what had caused the problem, they didn’t want to start the re-tiling. Gary was OK to say good-bye to that job and move on to something else! While he did a couple of small jobs around the campus, he also took care of some painting at the new barn – 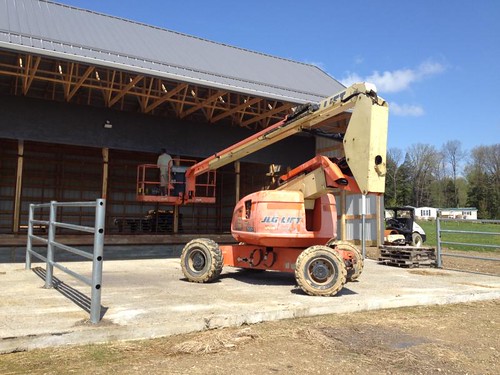 Oh, yeah baby – a man lift! Now that certainly perked up his day! He painted all of that gray surface, and thankfully he had a spray painter for that part. Because it was a pretty big barn – 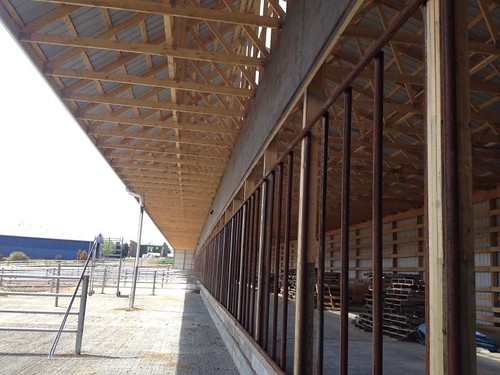 and doing it this way could have been pretty tedious! 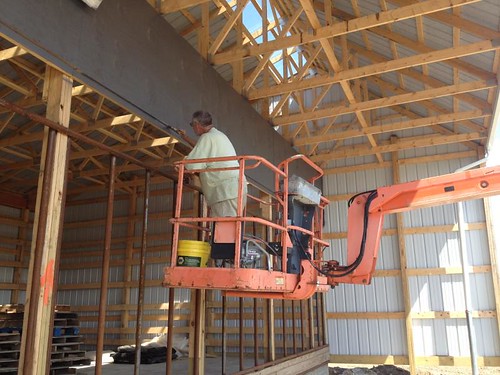 I did a little work in the office, and spent one delightful morning in the kitchen, but most of my time was spent working on getting the gardens tidied up after a very hard winter. 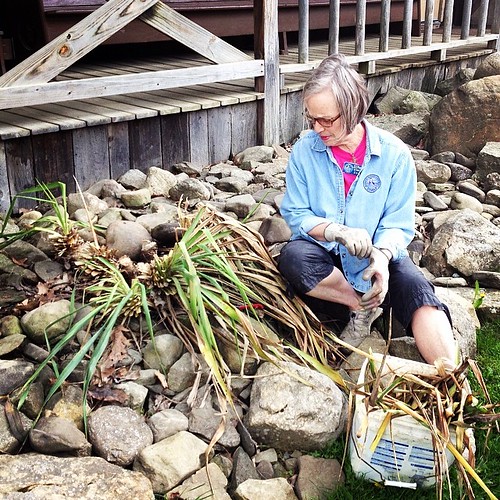 “So I’m supposed to trim off anything that isn’t green, right? That isn’t going leave much.” I’m not usually a huge fan of playing in the dirt (don’t judge me, I’m just trying to be honest here!) but this I thoroughly enjoyed. We not only had some beautiful days for gardening, but I got to work with one of the apprentices, Ellyn, and she was such a delight! 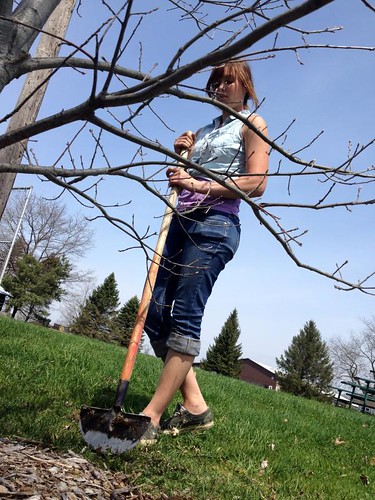 You see, the students that come to the discipleship program here at Miracle Mountain don’t just come for Bible classes and spiritual growth opportunities. They come here to WORK.  They all have jobs at the ranch during the year, but as camping season approaches each student gets assigned an area of specialization. Some will be counselors, many will work with the horses, some are in housekeeping, lawncare, building maintenance, and one will be in landscaping. That’s Ellyn! 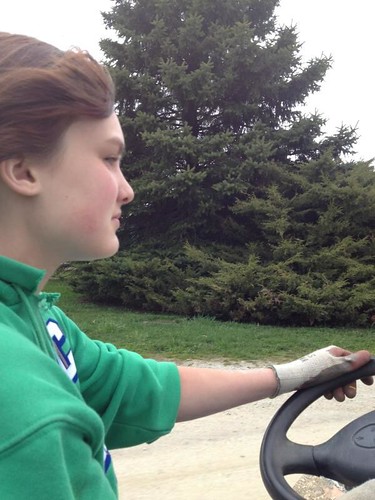 It was such fun to work along side this sweet young lady! She’s enthusiastic, energetic, smart, funny, tenderhearted and she laughed at my jokes. What’s not to love! 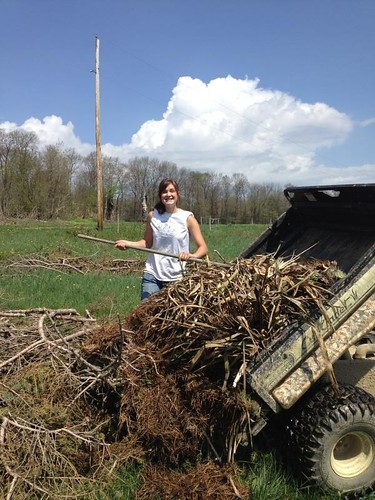 Plus she’s pretty handy with that Cub Cadet too! 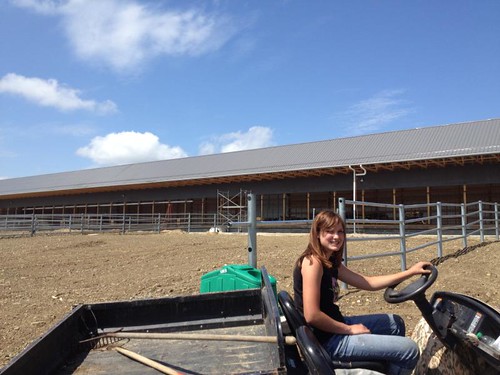 While we met many of the students and enjoyed our time with all of them, it was really special for me to get to know Ellyn. Although we were generations apart in age, we still were kindred spirits at heart.  It was hard to say good-bye, but I know we’ll be staying in touch (thanks in a large part to Facebook!).

So even though our time at Miracle Mountain Ranch was short, it was a grace filled couple of weeks. I do have some additional pictures (stop rolling your eyes!) and I tried to caption them so they might make some sense :). If you’d like to see them – click HERE! 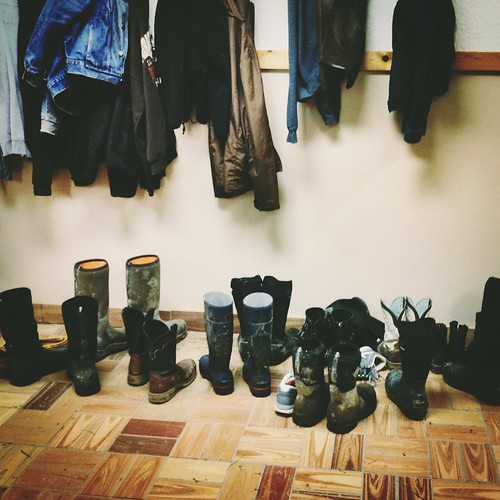 One thought on “Miracle Mountain”