We were, weren’t we?
For years now I’ve been wanting to do a fabric postcard of the cabin for my sisters for Christmas. And I decided that 2014 was the year it was going to happen! I called upon my good friend Lynne (who is an amazing fiber artist) for some assistance and we scheduled a studio day at her home and got to work! 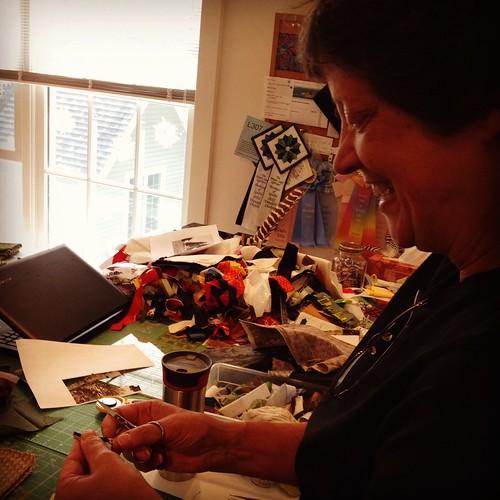 First we had to choose what view we wanted of the 8472 (give or take) pictures I’ve taken of the cabin over the years. While I was leaning toward the classic “pond cabin reflection” shot, 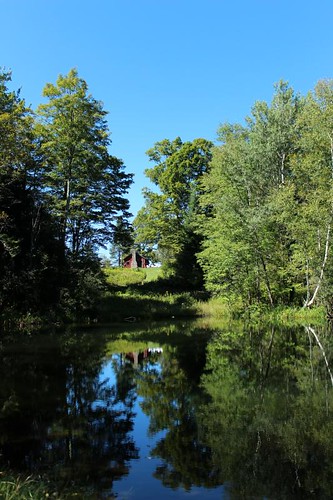 we decided that one that had more detail of the cabin would be better. 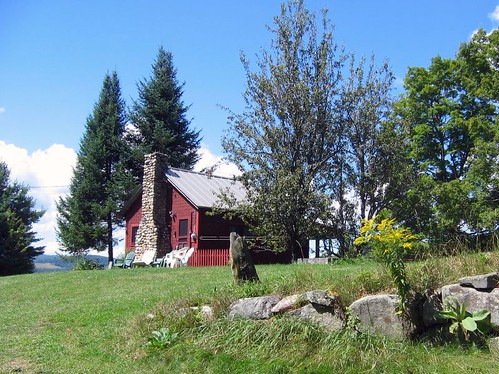 We copied it, enlarged it, cut it apart 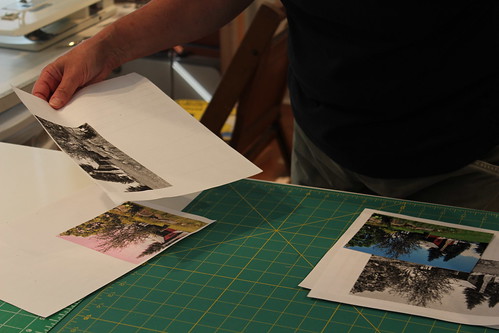 and then started choosing fabrics for our pieces of art!
While I was working on sky and hills and rocks, Lynne tackled making the cabin itself. Let me say right here that Lynne is my hero. She’s an expert with shadows and using net and tweezers, and thoroughly enjoyed making these 2″ cabins. 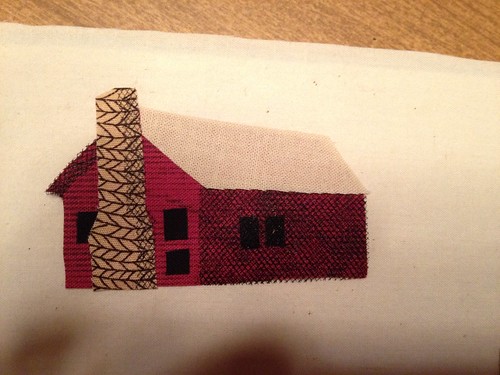 Three of them, no less! 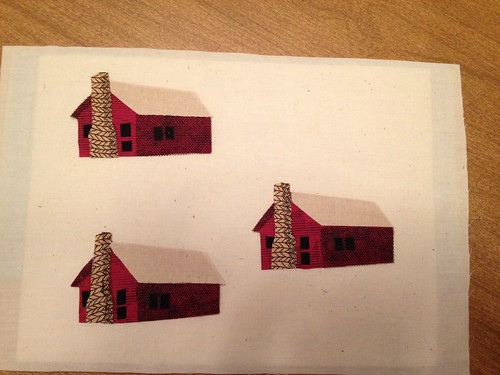 Even before she finished the cabins we were working on getting the sky and background right and figuring out the hills and rocks. 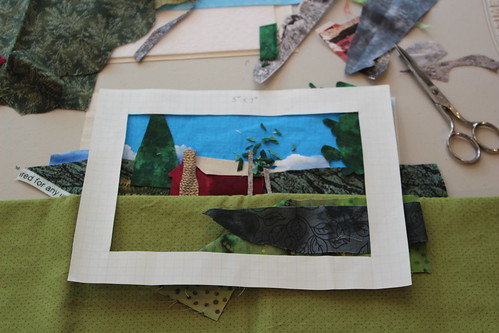 Oy – so many choices! 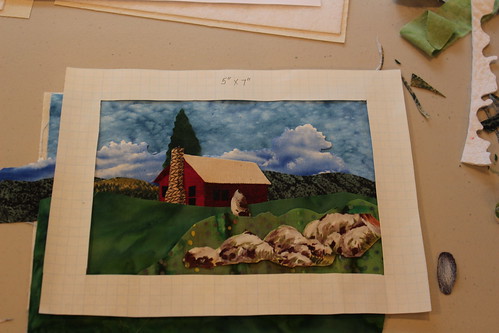 By the time our studio day was over Lynne had finished the three cabins, and I had roughly put together one of the postcards. 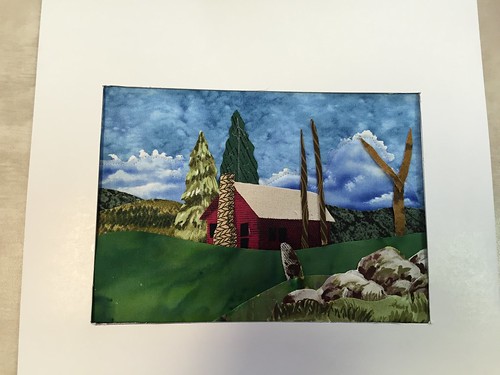 Emphasis on “roughly”.
There was still a lot to do, but the day was done. We packed up the fabrics and the postcards and those three precious cabins, and she sent me on my way. I was on my own, but psyched to get them done.
By the time I got back to them several months had passed. The being psyched had been replaced with being terrified. What was I thinking? My mentor was thousands of miles away! Thankfully, Lynne was actually only a phone call away, and she coached me through my jitters and insecurities. Once I got started again, it became fun (I think Lynne knew that would happen) and before long (well, it was a couple of days) all three were done! 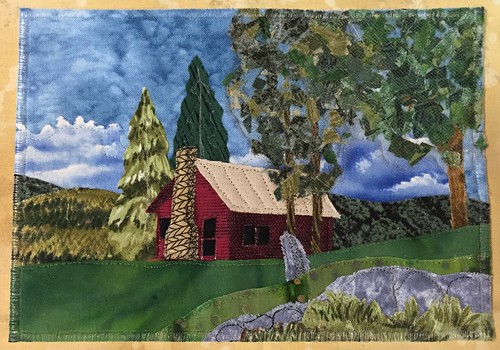 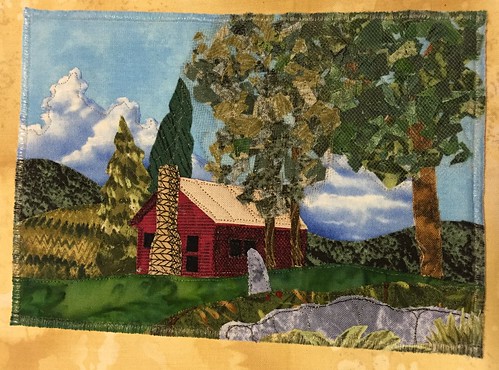 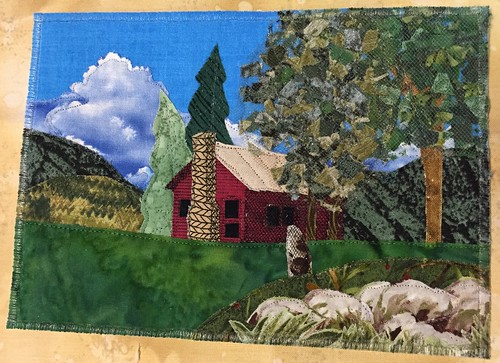 All the same, all different! The ones for the sisters got frames, 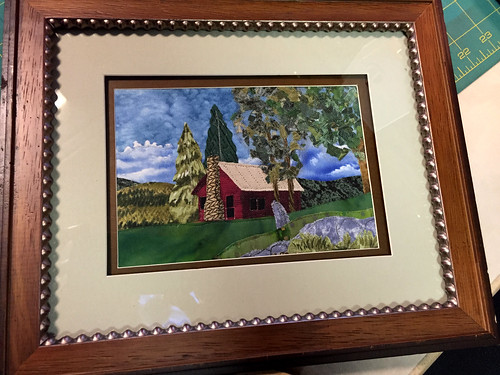 and mine is still just hanging out at my place having not quite made it to a frame yet. 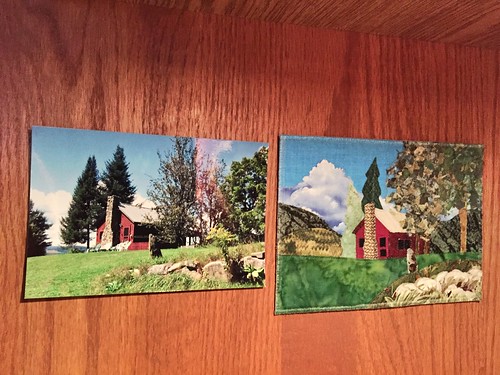 But it’s hanging out with the original, so that’s kind of fun.