What did you do with all your stuff? I can’t even begin to think about sorting through all these years of “Stuff”.

Man, did we have some stuff!
Before we lived in our 300 sq. ft. house on wheels, 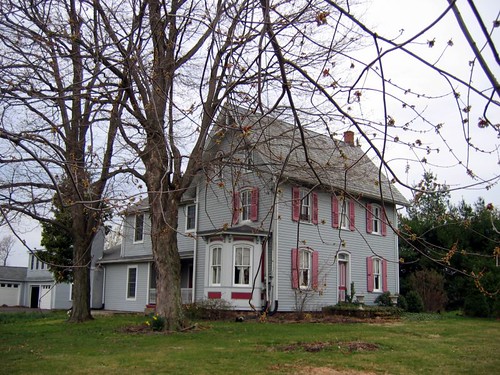 3500+ square feet of stuff. We’d lived in that old house for almost 25 years and trust me, you can accumulate a lot of Stuff in that many years. We had kid stuff, collectible stuff, Mom’s stuff, Grandma’s stuff, sewing stuff, tool stuff, old stuff and new stuff. Fortunately, I had over five years from the first mention of this adventure to the day that we actually took off, so I was able to get a head start with the liquidation of the Stuff.
Here’s how it worked for us.
Every Spring (and then sometimes in the Fall, too)I would have a yard sale, getting rid of the easy stuff. You know, those placemats you never really liked and that ceramic statue your favorite aunt gave you that never quite made it out to a shelf. For me it was kind of like peeling an onion. Every year I would just get rid of another layer of stuff. If it didn’t sell, it wasn’t allowed back in the house – off to the local thrift shop it went. Each year that went by, more stuff moved into the “do I really need this?” pile and less stuff remained in the “must keep” pile. Oh, I made sure that the kids got what they wanted (not to mention all their old report cards and other early years memorabilia) and that precious family heirlooms were distributed appropriately.  With the exception of a couple of pieces of furniture we left for our house sitters to use, by the time we hit the road in 2004 we had boxed up our remaining “must keep” stuff and had everything contained in one small room in the back of the house. The “For Sale” sign was firmly in place (of course, it had been there for a while without much action), we’d kept (what we thought were) the essentials and we were on our way.
We returned to PA after a year with a new understanding of our adventure. Instead of this being a one or two year adventure, after which we would purchase a small house and go back to work, we realized we didn’t want to have an “expiration” date on this journey. So I went through all those boxes and had one final Yes-this-is-the-good-Stuff yard sale. The last of the furniture went to family and friends, and we whittled down our “keeper” boxes to about 15. The house still hadn’t sold, but I wanted it to be as ready as possible, so we moved those last boxes into a small unused space in a friend’s basement.
A couple of years later (remember, no known expiration date) we moved those boxes to our son’s house in Ohio. And every year or so, during a visit, we’d pull out a box and see just what still needed to be kept.
And finally this year we did one last purge and moved the remaining Stuff to our daughter’s basement. (Here’s a tip – have someone from the next generation go through the piles of pictures you’ve kept and decide which ones to keep. After all, they’re the ones that will get the task later down the road!). When all was said and done, we had condensed our stuff into this – 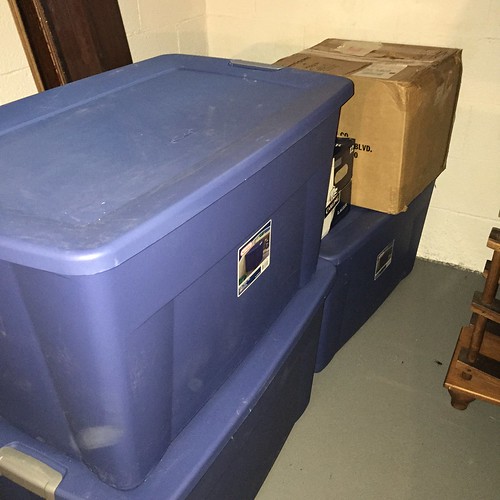 It only took us 10 years, plus those five to start with, but I think we’ve done pretty well.

Full Disclosure – just because we’ve condensed our ‘previous lifetime’ into 3 plastic tubs and a cardboard box (and the box is headed to the cabin!) that doesn’t mean we’ve actually conquered the “stuff” battle. Whether it’s 3500 sq. ft or 300, stuff just accumulates. We try to stick to the one in-one out (or one in-two out) rule, but a quick peek at the under bed storage compartment will tell the tale.
And no – there will not be a picture of that!