So Gary & I have been babysitting our 5 grandchildren (aged 2 – 12) in M-ville for the last couple of days. I’m happy to report that (so far) all children have made it to school on time, homework has been done and chores have been completed. Teeth have been brushed and fruit has been included in all lunches. Sometimes, though, we have had to go to extraordinary measures to keep all the balls up in the air. Take tonight, for example. E had cheerleading practice until 5, H had to be at the local gym for a class as 5:15, M had to be at the gym for a class at 6:15, and I had a hair appointment (made long before I was aware of Tuesday craziness) at 6:45.  Everything seemed doable except that pesky dinner thing. Here is what we worked out:
Gary took H with him to pick-up E at 5. He then took H to the gym and took E “out to dinner” at McDonalds (which happily is very close by). He and E returned to the house with Happy Meals for the boys (and a salad for me) just in time to leave with M to pickup H and drop off M for her class. Then he took H “out to dinner” at McD’s before they came home. Just in time to take me to the hairdresser, leaving the very responsible E(12) and H(10) home with the boys (with a little help from the Lego Movie). After he dropped me off, he went on to pick-up M at the gym and take her “out to dinner” with Pops at McD’s. They were back to the hairdresser (in the same shopping area as McD’s) just as we were finishing up. We made it home in no time, made sure that everyone got their Tuesday baths, and were only about a half hour late to the “optimum” bedtimes. Books were read, songs were song and prayers were prayed. It was a little crazy (especially for the chauffer), but there were several upsides –
*Each of the girls got “dinner out” with Pops.  Even though it was only McD’s, it still was one on one, and that was great. (And as an added perk, he now knows the servers at McD’s on a first name basis, and even garnered a free cup of coffee on his last trip!)
*We never had to put the boys in the car. And since it was raining off and on all evening, that was a very good thing.
*The boys had Happy Meals – which made them very happy!
*And I got my long overdue haircut!

Other coping mechanisms included (but were not limited to) – Dinner last night at Waffle House. 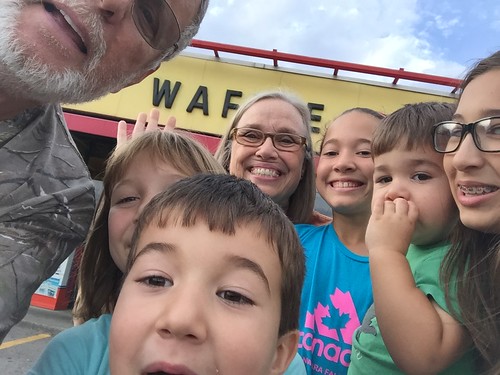 Yes, we are those grandparents!

It’s been great fun and we’re so happy that we’ve had the chance to spend this extra special time with these kiddos!
But we certainly know why God gives kids to the young.
Zzzzzzzzzzzzzzzzz