Well, we’ve been at Don & Jenny’s for a full week and let me tell you, it’s been an eventful one. First of all – I need to give a bigger than big shout-out to these good friends. Not only did they invite us to South Dakota and offer to help us with these renovations, but their home has an RV bay that they weren’t using and they offered that to us if we needed it. While I guess we could have done this in the great outdoors, being able to do the entire job indoors has been a huge, as in HUGE Blessing! 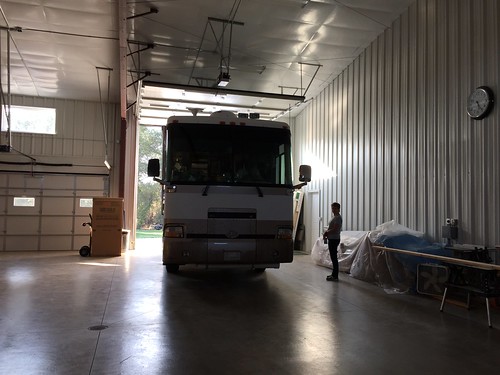 Let’s review our renovation plans. Install new wood flooring in the living area of Lizzie, and replace our existing RV refrigerator with a residential model (and almost double our refrigeration size.) There was also some talk about changing some shades and valances, and maybe sprucing up the bathroom (we replaced the toilet back in July, so that was already on its way). But the main focus is the floor and the refrigeration. First things first – Emptying and demolishing Here’s a shot just before the emptying happened. From the front to the back: 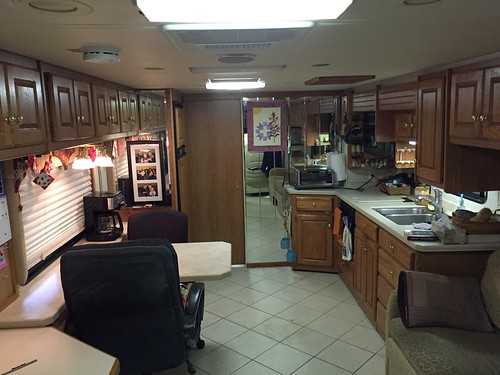 From the back to the front: 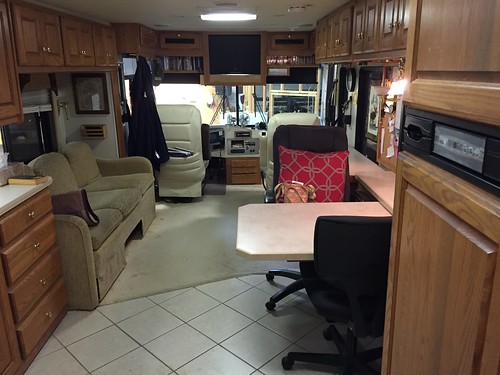 Everything except the free-standing table/counter and the kitchen sink/counter/cabinets had to go. And the easiest exit for these items – the ‘picture’ window (which had been largely covered by the desk for the last 9 years). 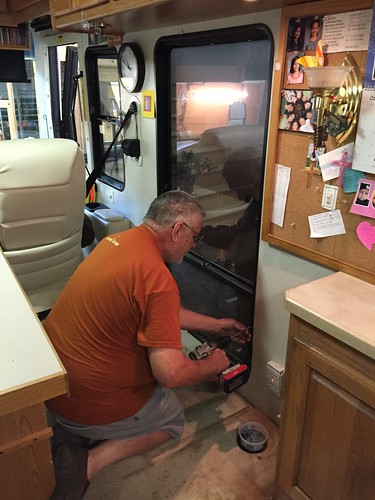 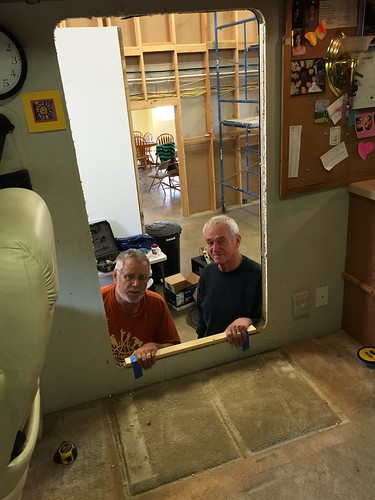 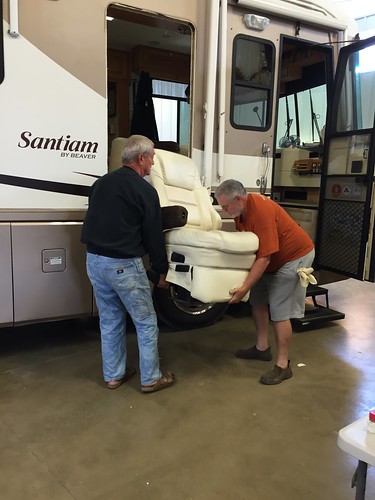 The sofa came out while I was running errands with Jenny, but soon the rug was coming up. 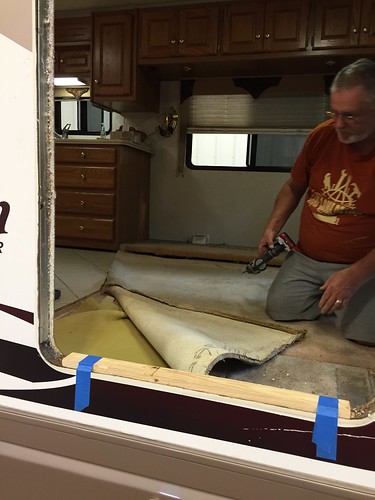 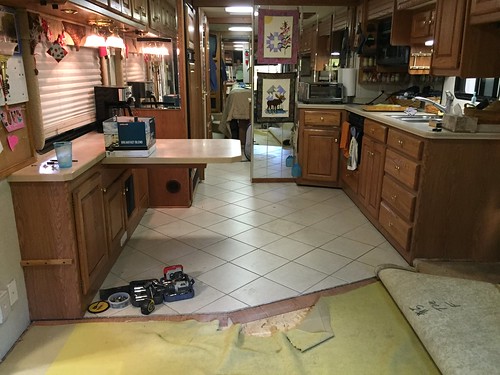 (Notice how things are still looking quite civilized? That was about to change!)
As the rug came up in the cockpit,  we (he) discovered that what we thought had been a small leak (that had since been remedied) had done a bit more damage than we realized. 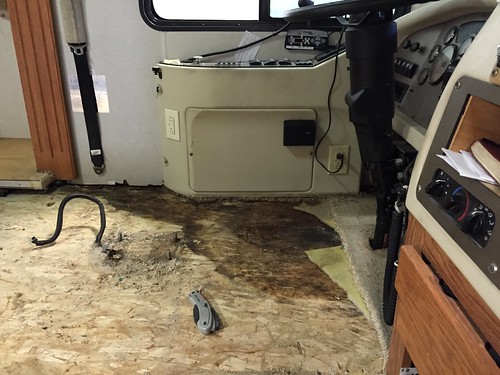 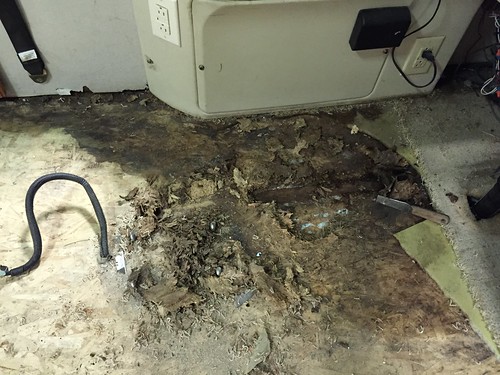 Ugh. Fortunately, Gary is a master problem solver, so he carefully cut out the damaged area and puzzle-pieced a replacement floor into place. See that console at the top of the picture(the one with all the buttons in the previous picture)?
Unlike the furniture at your house, our furniture (generally speaking) is bolted down. Or built in. Or covering some huge tangle of very important wires. This console had to come out for us to get the flooring in – 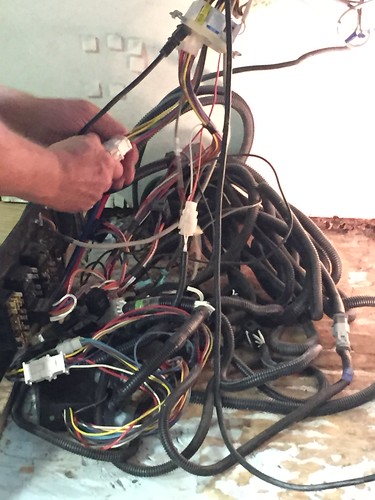 Oh, My. And this is why we travel with 17 different colors of electrical tape! But I digress. With the front floor area well on it’s way to stability (and all those wires carefully marked for re-installation), the guys moved to removing the tile. 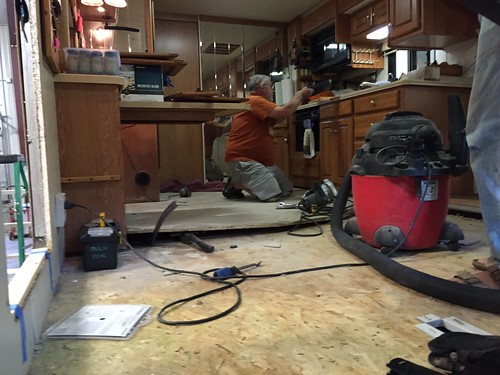 Can you see from this picture how the tile is attached to a backer board and then that board was attached to the subfloor? It would have been easy-peazy to remove it all in a couple of pieces if it weren’t for the fact that the built in cabinets were built in on top of the tile. So. Using a little circular saw, Gary would saw right close to the cabinet while Don held the shop-vac in a (somewhat vain though certainly appreciated) attempt to capture the finer than fine dust that the procedure produced. 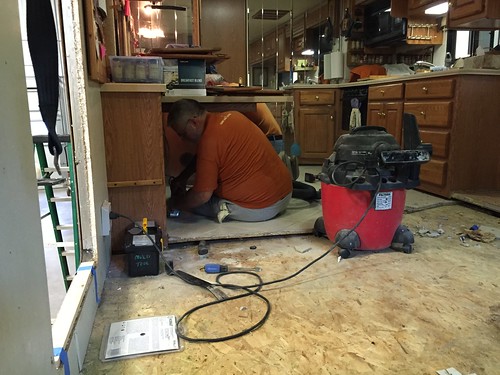 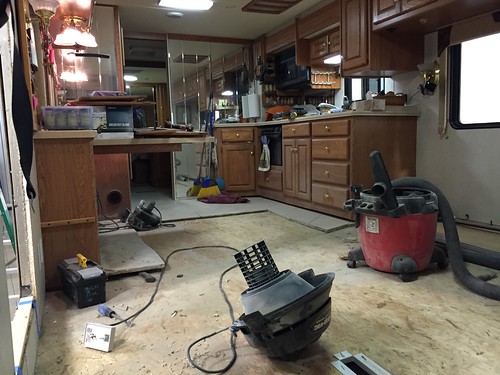 Perhaps you can sense the civilization slipping away in this picture…..
The last corner was the toughest (I think it was saved for last because Gary knew it was going to be the hardest). 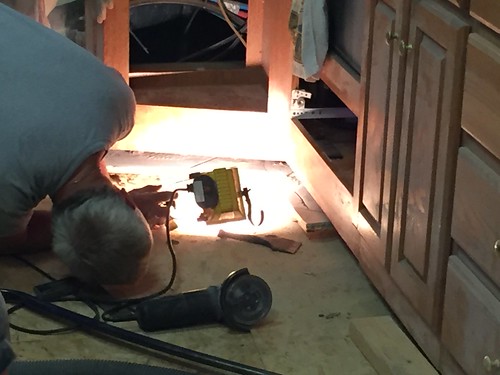 and there was great rejoicing once that last section of tile was removed. 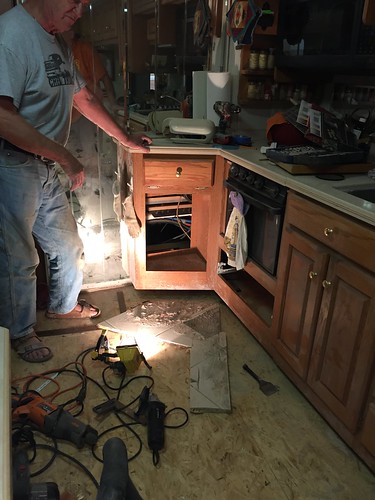 (I shouldn’t be concerned that they had to cut a hole in the back of the cabinet and jack up the slide from the outside, should I? I mean, they knew what they were doing, right?)
At any rate – the rest of the demo and the putting in the final sub-floor went like clockwork! 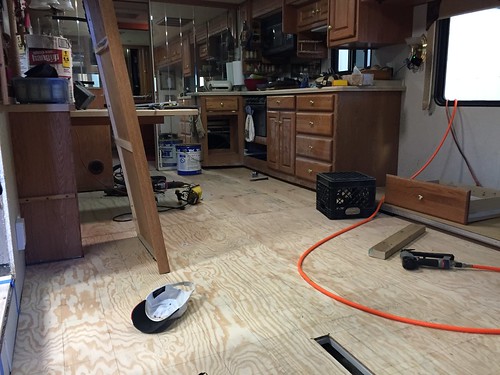 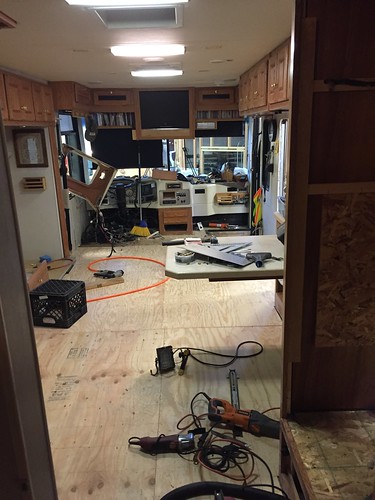 Still quite a bit of chaos there – not to mention that fine coating of tile dust that is covering the cabinets and most everything else in the house – but all in all it was a great first week. And we’ve actually made a little more progress than that last picture would indicate, but I have to save something for the next post, right? Tomorrow we’re off to Sioux Falls – a mere 70+ miles, but the closest Lowes, Costco, etc. – with detailed list of stops to make and supplies to purchase (or return from last week’s trip). And I promise we’ll be inside the truck in our seatbelts! 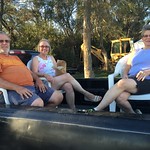