Remember when we had Maddie for a week this summer? We started off that great adventure by meeting up with Maddie and her family at a park in Washington, PA, to retrieve her for our adventure week. We had a lovely picnic, played some games, and then we went our separate ways, Gary, Maddie and I heading back to get the RV in Chambersburg and Toby and family headed back home (for a lonely week without Maddie!).
We were almost back to Chambersburg when we stopped for gas. And Gary realized he did not have his wallet. My heart sank as I remembered the hassle of the lost wallet just the previous November.

“Did you have it out earlier” No. Not since we stopped for rolls and I know I put it back in my pocket. (We called the store anyway to check.)
“Maybe you left it in the rig?” Nope.
“Maybe it fell out when you sitting in Toby’s car?” No – we called and he searched.
“Maybe it’s somewhere in the truck?” Nope, we tore it all apart. (I did find a Christmas ornament I thought I’d lost. But no wallet.)
The next day we called everywhere we’d stopped along the way to see if anything had turned up. No.
We called the park to see if anyone had turned it in. Or mowed over it. No. Nothing. Nadda.

Now normally I would have gotten busy, cancelling credit cards and working on replacing insurance cards, driver’s license, etc. But we were heading off on a vacation and needed those accounts. (I have two credit cards that live in the motorhome, but one of them had a very low credit limit and the other one was in the process of changing from a Visa to a Mastercard and I hadn’t received the new cards yet.) I still had my cards that we could use and while I wasn’t sure it was the smartest move, I decided NOT to cancel the cards and wait until we returned from our Adventure to sort out all that needed to be done.
Every day, several times at day in fact, I’d check in with my credit card and bank apps to watch for any suspicious activity. All seemed quiet. I knew we weren’t out of the woods, but we seemed to have been given a bit of grace.
The week flew by, and soon we were on our way home. We had stopped for fuel for the RV and I’d already fielded one “Suspicious Activity” call from our Visa card which always happens when we fill up the RV and charge several hundred dollars.(Yes, that is our life.) We were in trying to get sandwiches made when the phone rang again. I didn’t recognize the number and was about to let it go to voice mail when I decided to answer it after all.

I wasn’t in on that conversation (still chasing down those sandwiches), but the long story short is that someone had turned it in at the visitors center at Fort Necessity National Battlefield. Now we had driven past that National Park and had even commented that it would be an interesting  stop to make, but we had never so much as driven through the entrance. Or even slowed down as we went by.

Needless to say – we were totally astounded!!

What was lost had been found. The cash was gone (maybe $40 – a finder’s fee, right?), but all the cards were there. We were able to pick it up the next day as we traveled back down the same road to reunite Maddie with her family.

We have no idea how the wallet got to the visitor’s center at that park, and the wallet isn’t sharing any of the adventures it had while we were out making memories with Maddie. 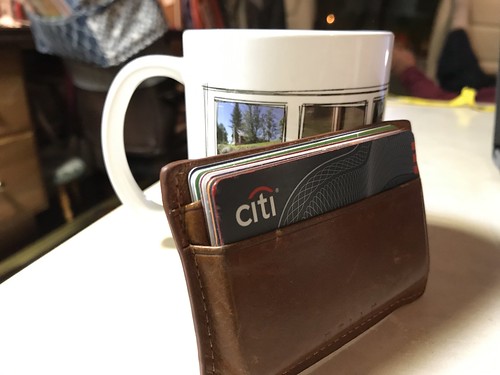 While I’ve remained vigilant in keeping close tabs on my accounts (and Gary’s wallet!), I can only give God all the praise and glory that in His kind providence, our wallet found its way home!