…life was nice and settled, along comes a little curve ball! We returned from our lovely two weeks at the cabin to find this when we opened the door. 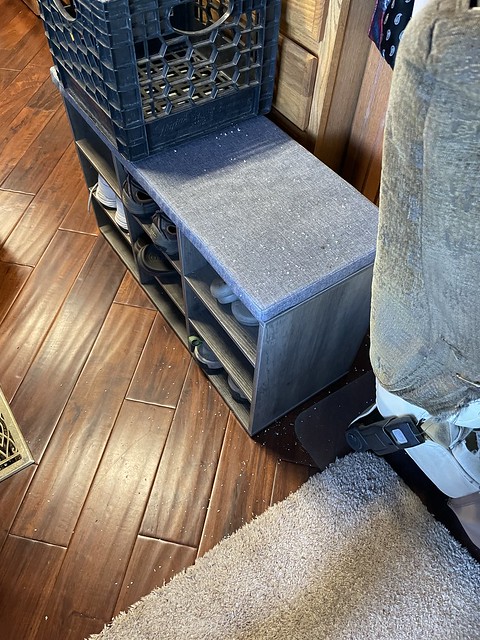 I’m not sure if you can see it, but there are tiny white ‘things’ sprinkled on the floor and on our shoe rack. They were not there when we left.  Hmmm. I couldn’t tell right away just what that debris was but eventually realized that one of the louvers on an A/C duct had been chewed off. 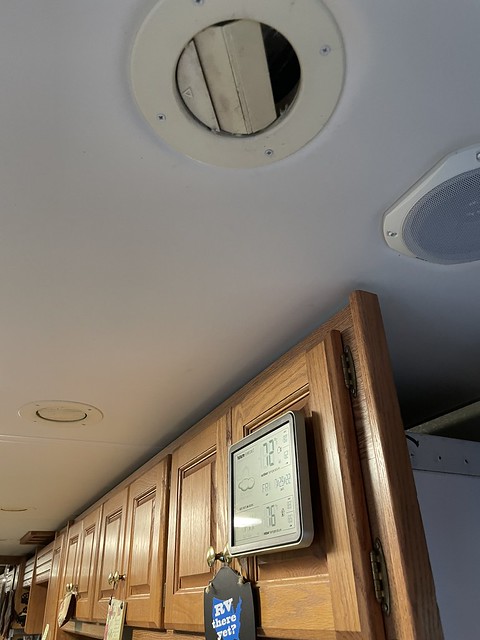 Uh-Oh. Something was partying in the house while we were away! It had been a long travel day, so we cleaned up the mess, taped over the louver,  brought in the refrigerator stuff, and pretty much went to bed. The next day we did a little more investigating (checked the roof, etc) to see if we could figure out where something could’ve gotten in (knowing full well that small rodents (we’re thinking mouse or chipmunk) don’t need much space to gain entry.) But all seemed secure (ha!), we didn’t hear any other activity, and while we couldn’t figure out for the life of us the reason the louver was all chewed up, we settled back and chose to believe that all was well (except for the need to replace that one vent!).
Ha, again! Today turned into a scorcher so we turned on the AC at lunch time. As soon as the fan came on we were in the midst a snow shower of Styrofoam! Looks like our guest(s) had been around for a little longer than we thought. Thankfully not all of the vents were open, so the snowing was limited, but when we took down all the vent covers (all 12 of them) there was plenty of Styrofoam in each one. 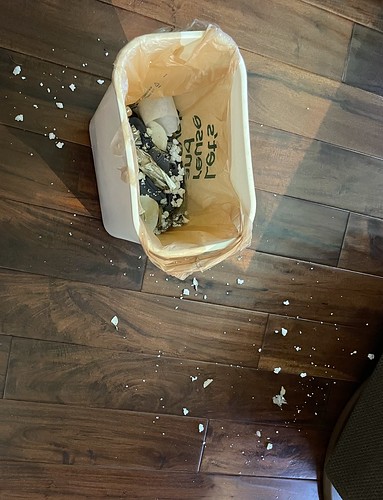 And all those vents? Once we dumped out the snow, 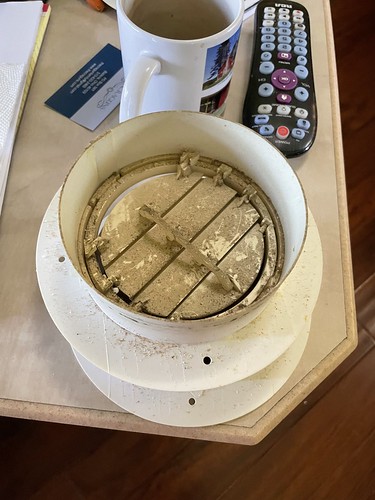 Eewwww.
Was I supposed to be cleaning those on a regular basis? Well, regardless of my previous cleaning history, they are now ALL cleaned and reinstalled. Before they were put back (I almost typed ‘before we put them back’ but you know who really did the putting back, right?)I tried to get some photos of the interior of the ductwork – not so very successfully as you can see. 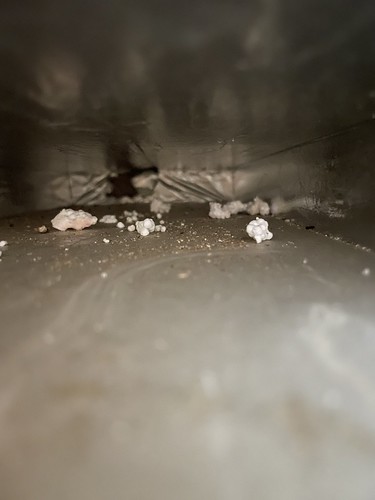 Is that a hole back there?
Gary ‘Great Stuff’ed areas that he could get to that wouldn’t hamper the air flow, tried to fill some outside spots that looked like they might be points of entry, and started up the A/C. He hadn’t put the vents back on yet, so there was still a bit of snow, but cooling was happening!! Yea!!!
Of course, there is no guarantee that the entry OR the visitor problem has been solved, but I do think we’ll sleep a little easier tonight. But trust me – if I hear one little nibble sound, that man of mine is getting getting awakened pretty darn quick!

Also, some hornets have decided that the generator cabinet at the front of the RV is a good place to build a home.  Enjoy your evening, little demons, tomorrow you will die.

2 thoughts on “Just when you thought…”