Back when my grandparents built this cabin,  ownership was easy. They deeded it to my parents who even after they (sadly) divorced still owned it jointly.  When they passed, they left it to the four of us siblings, which began to complicate things. We decided, instead of trying figure out how our four families were going to ‘own’ it, to form a non-profit corporation – The Dwinell Cabin Association. That way we all pay dues to cover expenses so no one is burdened with the financial responsibility or liability. Since we are an official corporation, we have to have an annual association meeting. Generally, we’ve met at the cabin with as many as who can come. 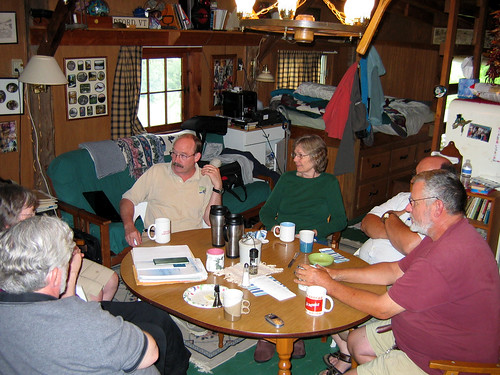 And to be honest, those meetings were mostly just excuses for us to get together and enjoy a meal and each other’s company. Of course, minutes were always taken to make it official. Our board of directors started with just the four of us – The Senior Siblings – and mostly we discussed different maintenance issues – Did the road need to be fixed? Should we replace our high-security chain across the road with an actual gate? Where should we hang the first aid kit? When should we have the next family reunion? You get the drift, right?
But as our family grew, so did our members and so did the Board of Directors! The next generation has started to take some ownership in our precious cabin and for that we are over-the-moon happy! Last year we had probably our biggest association meeting ever at our Family Reunion here at the cabin, with just about every adult in the family in attendance. 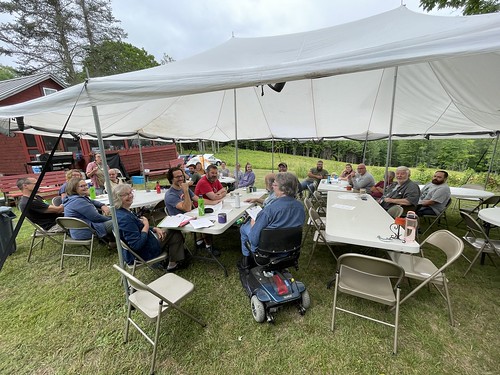 So much good discussion – so many new and fresh ideas! It really was a beautiful thing to see!
This year’s meeting was filled with ‘firsts.’  It was our first family meeting without Elna. And that was hard. It was also our first totally virtual meeting. With the exception of Gary, Chris and I who were together enjoying Chris’s internet, everyone else was at their own home. In North Carolina, in Pennsylvania, in Ohio, in Utah, in New York, in Vermont, and even (yes!) Australia! I can’t say it is my favorite way to have a meeting, but my it was grand to see all their faces and hear their input! 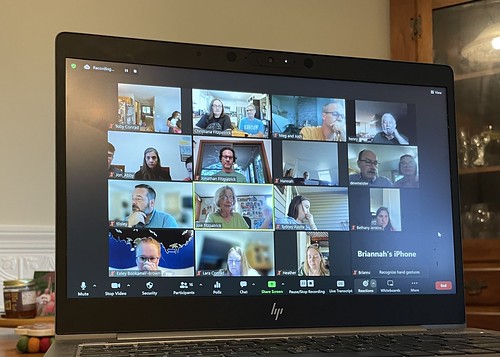 Gotta love technology!
Two new board members were voted in and for the first time ever the ‘young’uns’ out numbered us ‘oldsters’. (On the board that is. They’ve outnumbered us in general for YEARS!) But I’m pretty sure that is the way it’s supposed to go!
As our family grows and the next and next generations start using the cabin regularly (a fifth generation Dwinell will be here right after we leave!) it’s wonderful to watch them love the cabin a little more with each passing year.
And as you can see – there are a lot of us to share that love ! 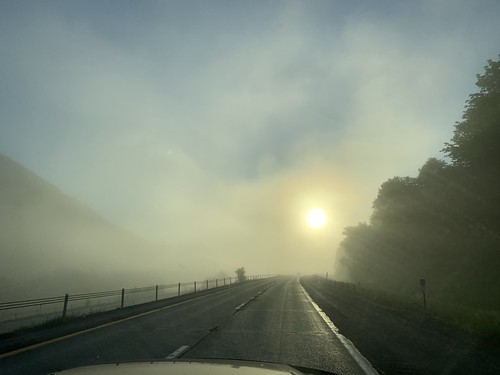 because there was much to be accomplished once we got there! In fact, we drove past the Cabin and went directly to Lowes to pick up supplies for the ongoing dock project. 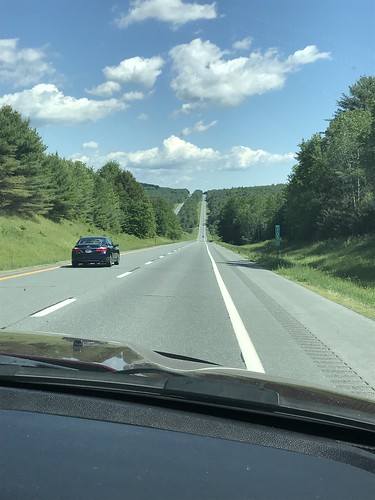 Even with the Lowes detour we still arrived in the early afternoon and were able to enjoy the day!

Our to-do list was pretty long, but mostly my heart was just ready for some long overdue (or so it seemed to me) Family and Cabin time. Gary had plans to raise the dock about a foot from where he had left it last fall (thankfully it had wintered well!) and then get the decking at least laid (if not secured). We also had our annual Dwinell Cabin Association (DCA) meeting scheduled for early afternoon Saturday which involved  four other families joining us. Here’s how the weekend went –
Friday – on the road by 4AM, 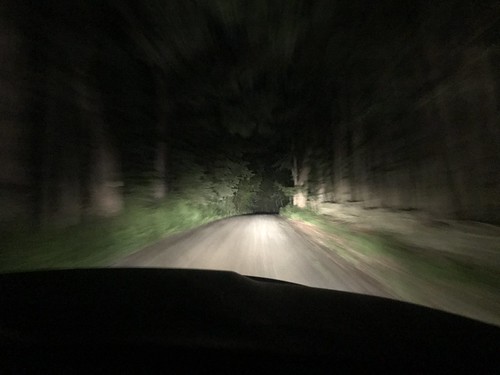 arriving at the cabin a bit after 1. Gary began cutting the decking for the dock and I began sitting around visiting with my sister! (We were essentially crashing Joie & Fitz’s time at the cabin, but they seemed OK with it!). Elna & Henry joined us later in the afternoon, and we had a sweet evening of catching up before what promised to be a Very Full Saturday.
Saturday – Although Friday was sunny and in the 70’s, Saturday dawned with cloud cover and a promised high of about 56. Brrrrrr 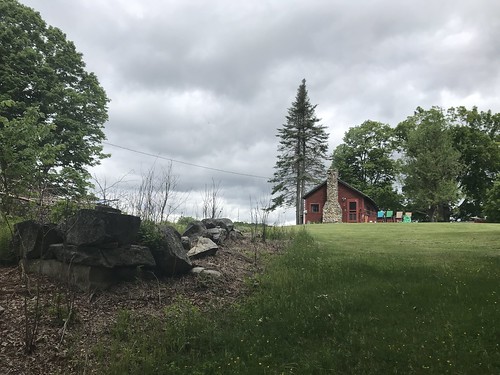 It didn’t seem like a very good day to be IN the pond working on raising the dock, but we (OK, Gary) was not to be deterred! He had thought ahead and brought his fishing waders so he was in good shape. 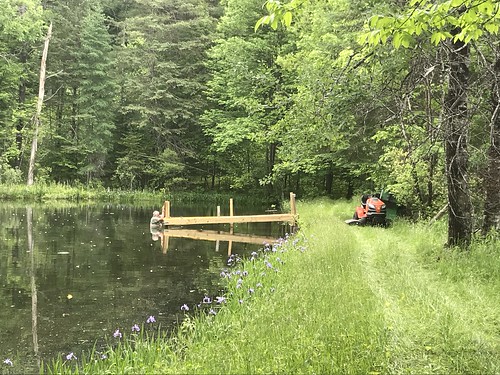 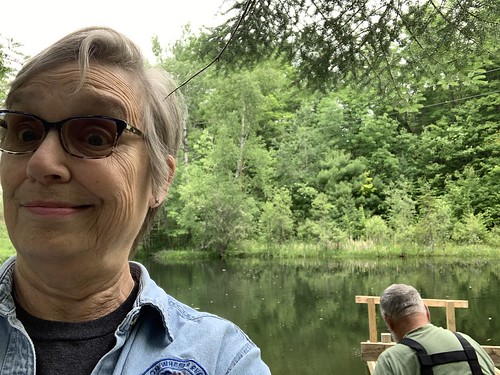 Along with the help of our sweet niece and her hubby (and a couple of cute kids and a young golden retriever who were not quite as helpful, but pretty darn cute) that first part of the Dock Project was accomplished before lunch. 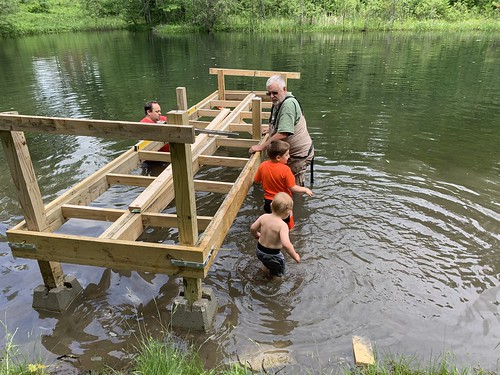 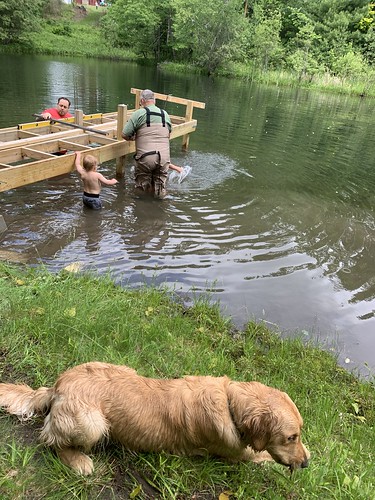 (Although Bethany and I are not in the photos, trust me, we were there in the thick of things doing our part. I just couldn’t handle being a help AND being a document-er!)
We were ALL very thankful for that crackling fire when we returned from our dock raising exercise! 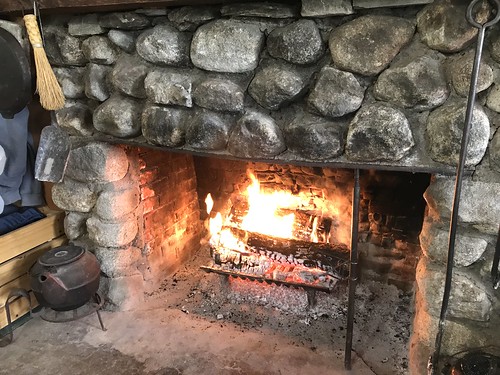 After lunch we all gathered for our Annual “Board of Directors” meeting for the DCA. What made this year’s meeting much more interesting and fun was that thanks to ZOOM, some tech smart kiddos and just enough WiFi from my phone, we enjoyed input from several other family members from OH, PA, MD, NY and NC! 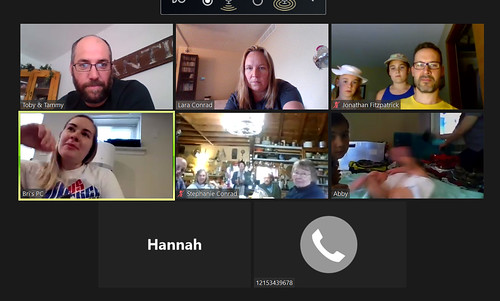 Here we are, in the midst of some discussion, with the computer attendees joining in! 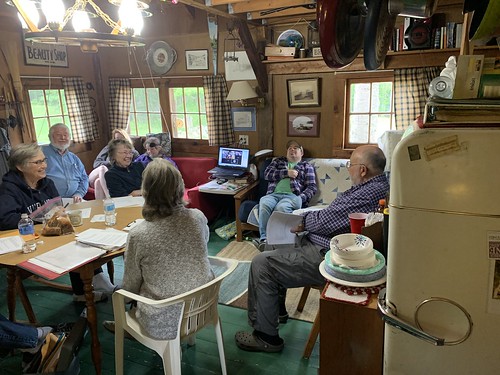 It was a good meeting – especially with all the input from the next (and next after that!) generation!
After the meeting Gary and some willing helpers finished up the dock decking. 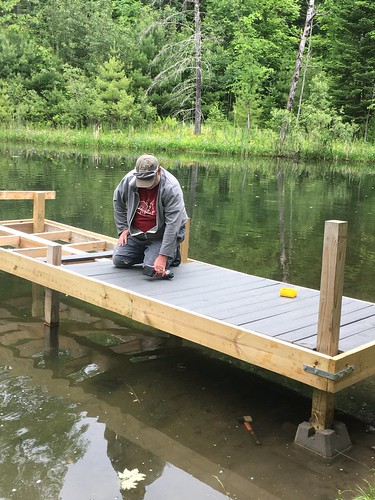 Despite the not-very-accommodating-weather, it was a lovely, lovely day indeed!
Here’s our attempt of a Family Selfie! Sure went a lot quicker than if I’d tried to get everyone organized! Gary just held up his phone, and said – “Make sure you can see yourself!” 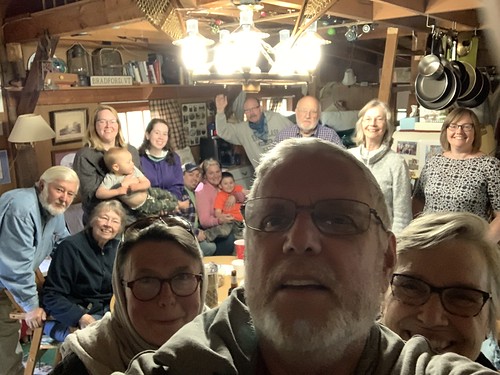 I pretty much love this picture!
Sunday was a bit quieter. We cabin dwellers did some Church streaming and afterwards Gary cleaned up any remaining mess down at the pond. Of course it was a beautiful morning – 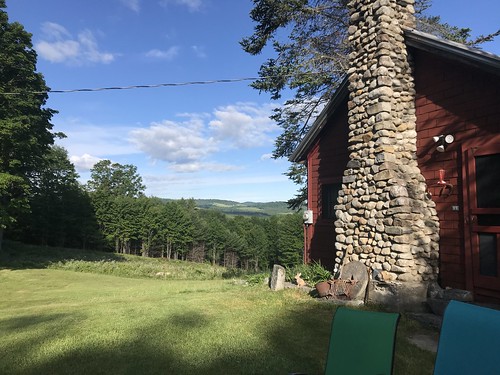 but still, we had to be on our way early in the afternoon!
This sweet Cabin visit just whet our appetite for MORE Cabin (and family) time – which hopefully will happen in July! After all, that dock still needs some work! 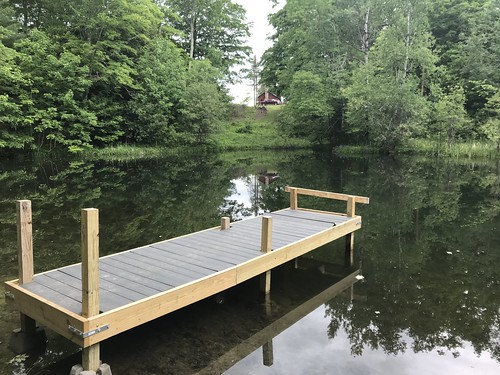 The 2020 SOWER Family Reunion (Florida style) has wrapped up, and I have to tell you I am exhausted from all the fun!  The pictures are taking their time uploading and I’m pretty sure I won’t be able to string more than a couple of sentences together. Since our 2020 Dwinell Cabin Association Family Reunion is only 141 days away, I thought I’d share some reunion pictures from our past DCA reunions-
2006 – Sandy Cove, MD. No group picture, so I just picked this one of the “Under eight crowd.” 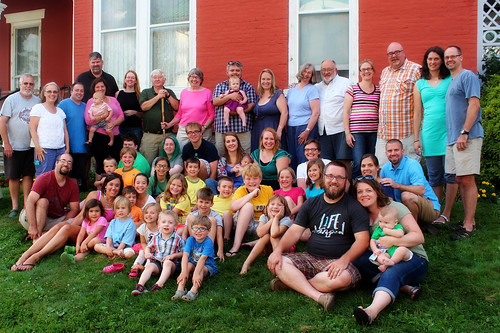 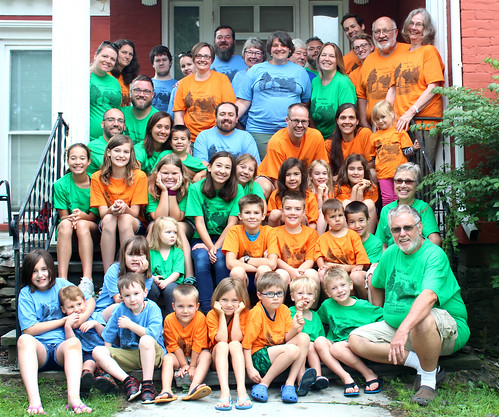