As I was saying yesterday, their focus was on this barn, which up until recently was just that – a barn. But the ministry was working towards making it into a workshop with parts storage, a small meeting room and a bathroom. They’d already put down a new concrete floor, finished off some of the ‘stalls’ for parts storage and begun to move some of the woodworking tools to their new home. 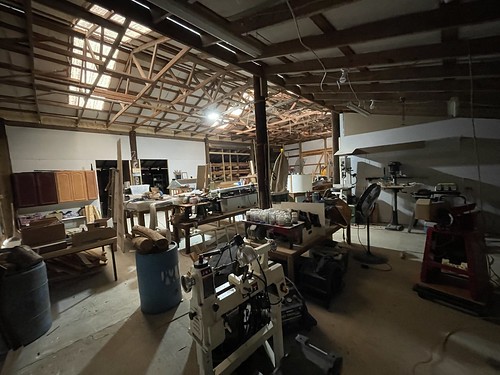 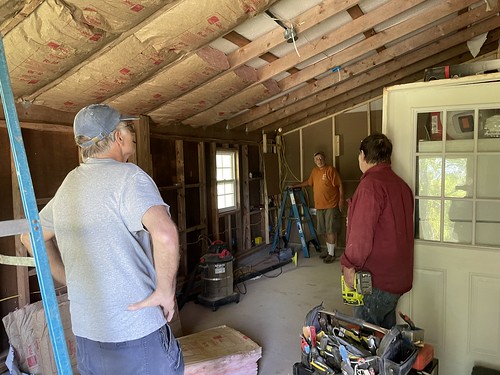 and upgrading the electric from ‘barn status’ to legitimate, useful service. 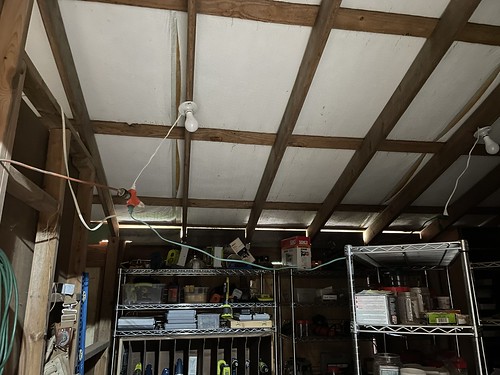 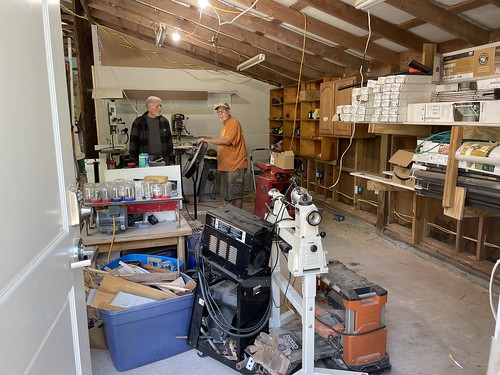 Gary and Don (the host) discussing options!
50+ duplex outlets, 12 switches, 8 single outlets, 3 electric drops, 3 overhead lights, 12 other lights and close to 1000 feet of wire later the space was well lit, and ready for anything you wanted to plug in! Safely.
I have to tell you, I am constantly impressed with how darn tidy he can make all that wiring! 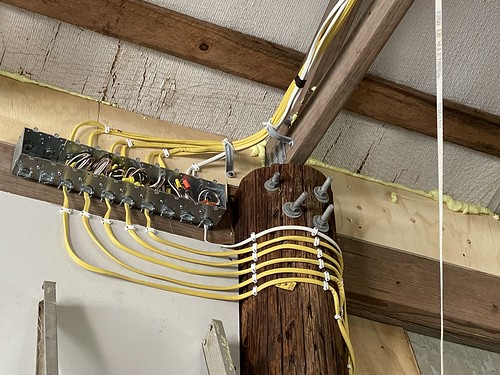 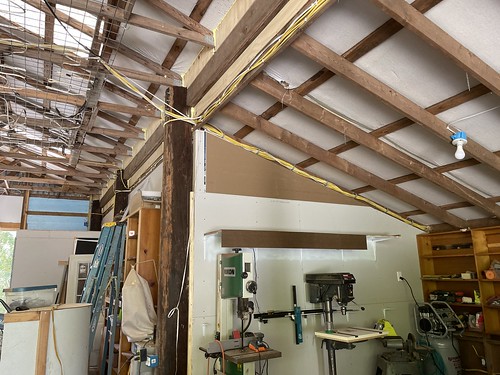 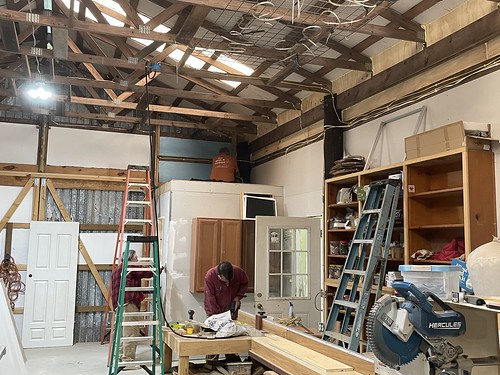 In the above picture you can spot Gary up on the ceiling of the new bathroom space finishing up a connection, one of the ‘electric drops’ (the thick black cord coming down from the electrical box in the crossbeams), one of the three LED lights (oh, so bright) in the main area, Linda working on the spackling of the bathroom, and Jim using a power tool. Oh, and lots of ladders! =)
I think if I have one picture of Gary standing in front of a jumble of wires – 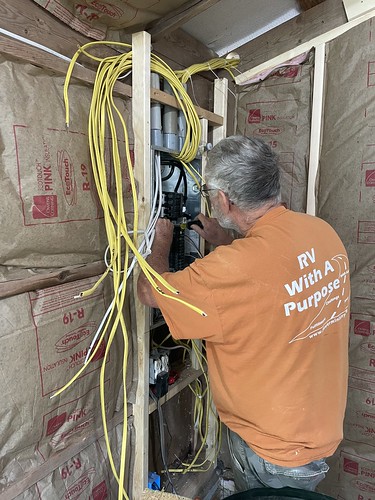 I must have a hundred! But somehow he gets them all tidy (and labeled) before he considers the job done! 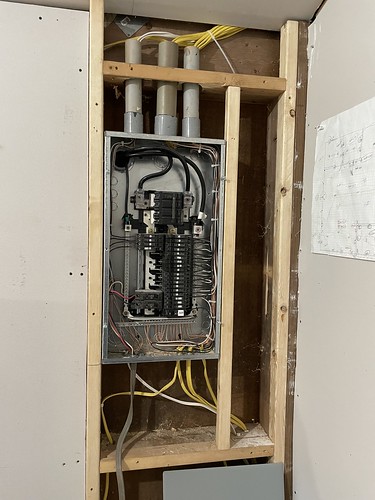 But Gary wasn’t the only one keeping busy out at the barn! Jim and Steve stayed just as busy with the insulation and drywall project! 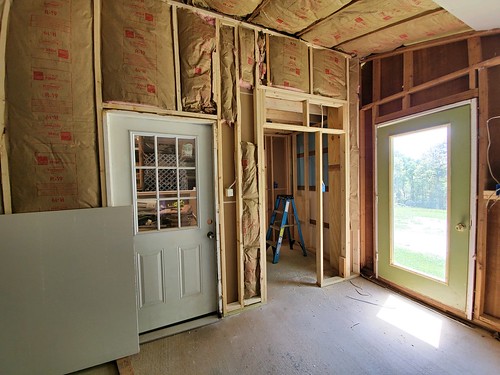 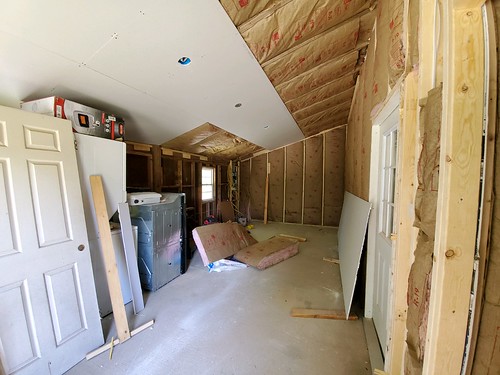 Some days they even had to work around Gary! 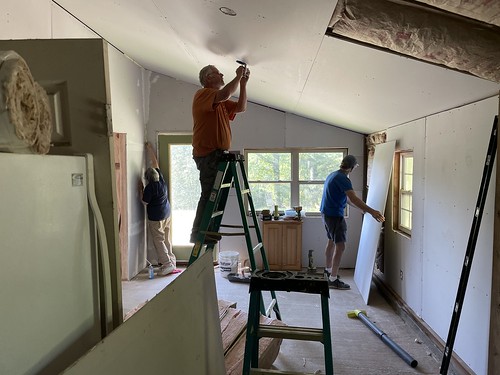 Finally there was just one last piece to hang – a 12 ft sheet on the ceiling. For that they had to call in reinforcements – the ladies! 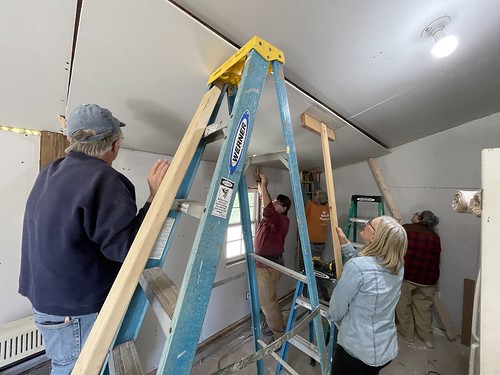 (Honest, I was helping too, but I couldn’t resist this photo op!)
As they say – Teamwork makes the dream work! And that last sheet was definitely a whole team effort! Steve and Jim put in the last of the screws, and while there is still plenty of spackling and finishing to do, the guys did a great job of checking those items off the list! 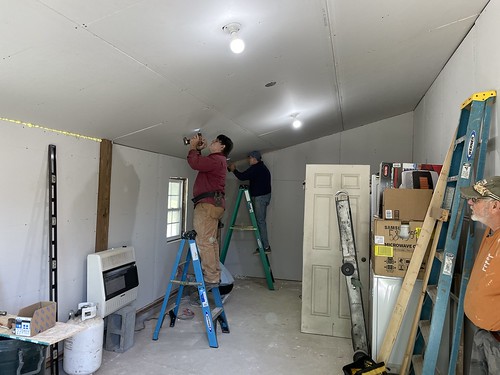 By the last day of the project we were all working at the Barn, helping to button up the last of the electric and wrapping up that drywall project.  Which made for a sweet ending to a very sweet project. We made some grand new SOWER friends, were able to get some good work accomplished for a very special project, and were so very blessed to be a small part of helping this ministry.

Thanks for joining us here at The Potter’s Place!

PS – If you’d like to see more photos of our time at The Potter’s Place you can check them out HERE!

God has been doing a very good job in keeping us distracted these days.
A little recap….
First our energy management system fried. It looked like a bad contactor, so my Super Hero Husband (SHH) wired our system around it so we would still have power. And ordered a new contactor.
Then he installed new 50 AMP service for both of the RV sites here. Looking good!

But wait. We have power, but nothing works. Hmmm. Checking all other options, it was apparent that our inverter had failed.
OK, the SHH worked around that so we’d have power but no battery charging, so we were good to watch TV, but we had to pretty much do it in the dark.  Ambiance, I’m thinking? (or maybe just go and read a book!)
When the batteries ran down we’d hook the house to the truck and give it a little charge. Who knew those jumper cables would come in so handy! So we were getting by OK. The new inverter would be here soon, right???
And lately….
The new contactor for the energy management system arrived  and was installed. But still no go. The contactor did need to be replaced, but probably it went bad because the control board had also fried. Back to Amazon we went!

Meanwhile, when Gary poured milk over his Crispix yesterday, he noticed it wasn’t very cold. In fact, nothing in the fridge was very cold. Really???? Sure enough, the refrigerator was not working. UGH. Thankfully the church where we’re parked has a refrigerator/freezer, so we moved the freezer stuff in there and got some bagged ice to make our fridge into one big cooler. 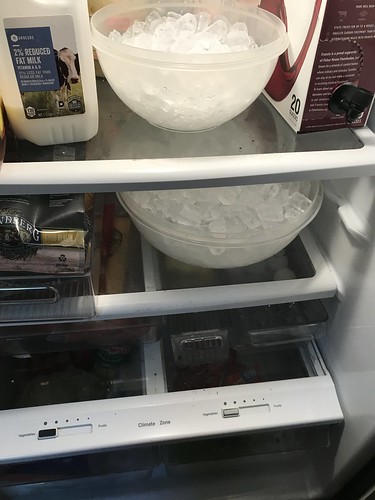 With a gas station across the street (with the 10# bags of ice on sale for 2/$4!) we once again averted a total melt down. (Get it? See what I did there?)
OK – SSH diagnosed a bad condenser fan motor on the fridge. Under $20 on Amazon and it’s already been shipped!

(Yes, the easiest way to get to the back of the fridge is from the outside of the rig. It’s just the way it is!)
Good news today – the new inverter arrived! Gary had it installed by dinner time and we were back up to full power!

So all is good.
Well, except our energy management isn’t working (but the part’s been ordered)
Oh, and then there’s the fridge thing.  But no food was lost in the telling of this tale!
These things – these distractions – are so minor compared to what folks across our country (and the world) are going through.  Regardless of whether or not I can turn on the light over the sink or have to walk into the building next door to get something out for dinner, we have a Great God who is caring for us in ways  we can only imagine.  This sounds corny, I know, but I believe it is true – we definitely don’t know what tomorrow will hold, but I know for sure who holds that tomorrow.  Praying you are resting in that knowledge also!

Thanks for stopping by – Be safe and stay well!

Today’s (totally unrelated) header photo is just a couple of cool dudes we found during our Sisters’ Winter Getaway. Not sure they are social distancing correctly, but they seem pretty chill to me!

Because I am essentially married to a Super Hero, we’ve made some good headway on our Electric Crisis.  With the new inverter on order, Gary got to work changing the wiring to bypass the malfunctioning unit. So the good news is that  we have our outlets back (i.e. microwave, TV, etc.). The bad news is without the inverter the house batteries (remember all our 12v lights) are not charging.  We checked out purchasing a battery charger to hold us over until the new unit arrives, but at a cost of almost $100, it seemed more economical to just run the truck for a spell each day to charge up the batteries. Oh, and be very prudent about turning on (and off) lights!  Imagine my delight when I remembered that I had a small desk lamp (the kind you PLUG IN!) stashed away in one of my storage bins!

In other “Shelter In Place” events, we ventured out to the laundromat today. We stuffed everything into one jumbo washer, pressed any buttons with our knuckles or elbows, and brought it all home to be folded. I think it was probably our fastest laundry run ever! (Unfolded laundry may or may not still be on the bed.)

Amidst all of the uncertainty of these days we still have so much to be thankful for! Yesterday I spoke with all of my kids and got to hear first hand how they are all dealing with jobs and kids and life in this new (temporary) normal.  They are well – and we are well.  Thank you, LORD!

We are resting in His Grace to be sure!

We’ve had a bit of a crisis (within The Crisis) here. Not to worry – it has nothing to do with our health. But we have run into a major glitch with our electrical system. Even though we are plugged into “shore power”, essentially nothing is getting said power. Apparently there is this magic box in our RV (probably in all RVs) called an Inverter, which takes the shore power and passes it through to all of our electric plugs (and hence electric appliances) while at the same time diverting some of it to constantly charging our house batteries which power all of our (12V) lights. (I know – you’re glassy eyed already. I can tell because as many times as Gary has tried to explain this to me, within 15 minutes (or heaven forbid I take a nap) any understanding vanishes.) The bottom line is that after checking all other possibilities (including but not limited to installing new 50AMP service to the 2 RV sites here), we still have no juice to most of our outlets. Thankfully our refrigerator is on a direct power line as is one outlet so we’re not living out of a cooler, we can still make coffee, and I can charge our devices as necessary. But it does mean that we’ve found good use for our COVID-19 Recovery check when it arrives. Another plus – we can order the replacement online, so we can continue to STAY HOME!
On a brighter note – I’ve jumped on the ZOOM bandwagon! Whoohoo! Now there’s something to be thankful for!!

Let me know what’s a good time for you, and I’ll set up a meeting!

PS- My header photo for each post will probably be random pictures from our travels. Today’s is from Yellowstone National Park!