Last month we had (at least) a neighborhood raccoon that was wreaking havoc with some of the grills and outdoor stuff at our little campground. Since Gary had spotted him one night (after he knocked over a bucket with peanut shells in it), he offered to man the have-a-heart trap.

The first night he smeared some chunky peanut butter on a slice of bread, placed it in the trap and set the trigger.  Sometime during the night, the raccoon went into the trap, grabbed the bread and exited without tripping the trap. He may or may not have been spotted taking victory laps around the trap while doing fist pumps.

The second night he cut up the peanut butter bread so it couldn’t be so easily taken and in the night the trap was sprung. 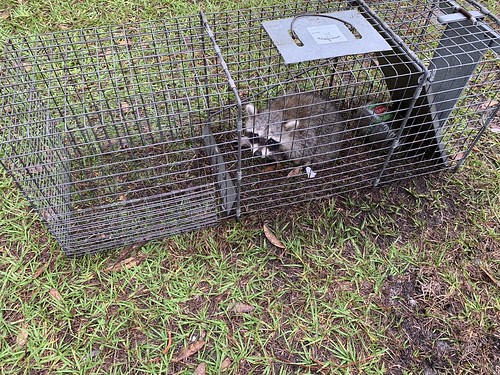 Awwww. So cute! This little fellow got a second chance on life when Gary took him about 5 miles down the road and let him go into a field. Pretty sure he (the baby raccoon) did not beat him back to the camp.

The third night we tried the cut up bread again, making sure it was ALL THE WAY in the back of the trap. This is what we found in the morning – 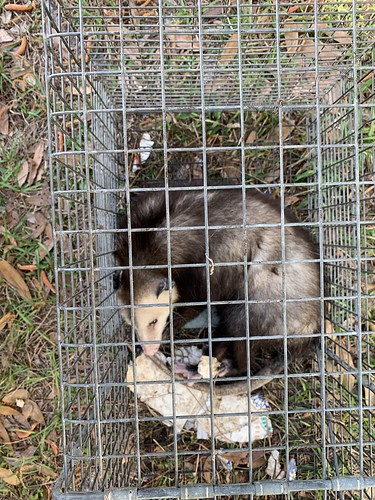 Since we weren’t on an opossum hunt, Gary just let him go at the camp. I think they are basically helpful critters.

By now Gary was determined not to let that raccoon get the better of him. Instead of bread, we smeared the peanut butter right onto the plate and then attached the plate standing up to the back of trap. As a precaution, just so that the clever raccoon couldn’t just work at it from the outside, he also attached a board between the plate and the back of the trap. 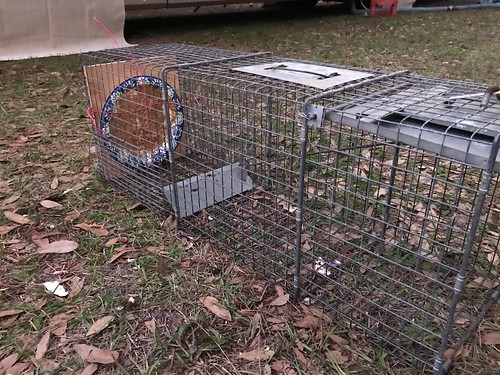 I was a little concerned that as we worked our way through the small woodland animal kingdom our next captive would be a skunk. But I’m happy to report that the fourth night was the charm. 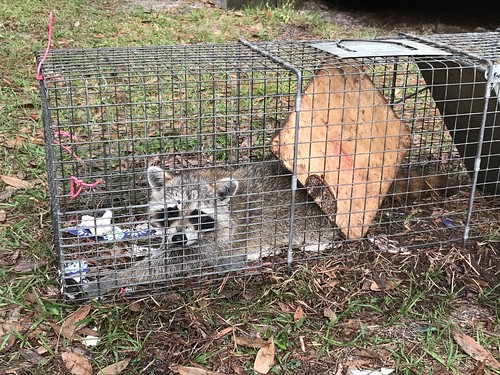 Success!!  But my, he did a good job on the plate and board!

I’d like to say for sure that this is the pesky raccoon that was causing trouble in our little neighborhood. That can not be verified. But I do know that while all we did was hand the trap with its prize over the camp director, I’m pretty sure that THIS raccoon will not be visiting any grills or dumpsters in the future.